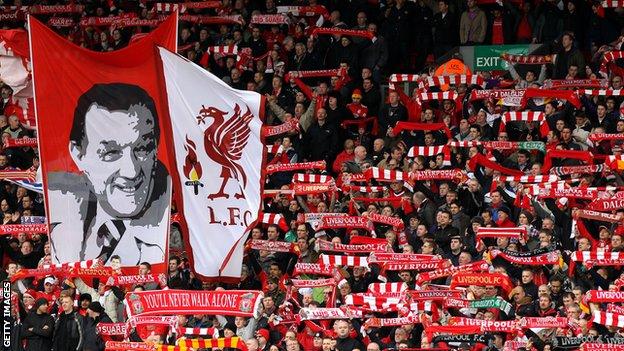 Brighton & Hove Albion fans will be hoping the club can continue their fine FA Cup results against Liverpool on Sunday.

The Seagulls have never lost an FA Cup tie at Anfield, and BBC Sussex looks back on two memorable occasions when Albion upset the odds against one of the giants of the English game.

Brighton, then in the old First Division, were drawn away to Liverpool in the fifth round in 1982/1983, and Tony Millard commentated on the match for BBC Radio Brighton.

"Frankly none of us gave Brighton much chance - we were there in hope," Millard told BBC Sussex. "It was the biggest match Albion had had in any of our lifetimes and they were struggling in the League.

"Gerry Ryan had done nothing all afternoon but gave Brighton the lead in front of the Kop.

"Craig Johnston put Liverpool back on terms, but it wasn't long before Albion got the winning goal.

"Jimmy Case was then amazingly 25 yards out, drew back his right foot and wallop - 2-1. After that it was all backs to the wall.

"It was like the Alamo really but in the end, they won. Souness, Hansen, Lawrenson and co couldn't believe it.

"We got the plane back from Manchester and later that night I was interviewing the players in a wine bar in Hove. Everyone was absolutely amazed and the interviews got more slurred as they went on."

The Seagulls were relegated from Division One that season, but made it all the way to Wembley, which remains the only time in their history they have reached the final.

Brighton travelled to Anfield in the fourth round in January 1991 as a Second Division side.

The Seagulls went 2-0 down but fought back to salvage a 2-2 draw. John Byrne, who is now a summariser for BBC Sussex, played up front for the Albion that day.

"There was a spell when we were 2-0 down and I think Liverpool must have had a spell of about 70 passes and we couldn't get a kick," Byrne said.

"We were looking at the clock and thinking let's get this over and the bus back on the road.

"All of a sudden we got a penalty and were back in the game. I was lucky enough to get the second goal and it caused great celebration.

"I think we all jumped into the crowd with the fans at the end of the game."

Clive Walker played on the wing for the Seagulls, and says the support they received from their travelling support was crucial.

"Albion fans were there in abundance," Walker said.

"About 5,000 of them had travelled up there and when you play those kind of games against big, big teams, you always like the support of your travelling fans.

"The noises they made were outstanding. John and Mike Small up front were terrific, and to get the equaliser was fantastic."

The Seagulls have already pulled off one upset in this season's competition, beating Newcastle United in the fourth round.

And both Byrne and Walker believe they are capable of another giant-killing.

"The players have got to go there and enjoy the atmosphere," Byrne said.

"You never know in the FA Cup. You may get one opportunity to change the game.

"It happened against Newcastle and it may happen on Sunday."

Walker added: "It is a day out, but there's always that element of 'Well, can we?' in fans' minds.

"If they can do what we did, they'll be absolutely cock-a-hoop."