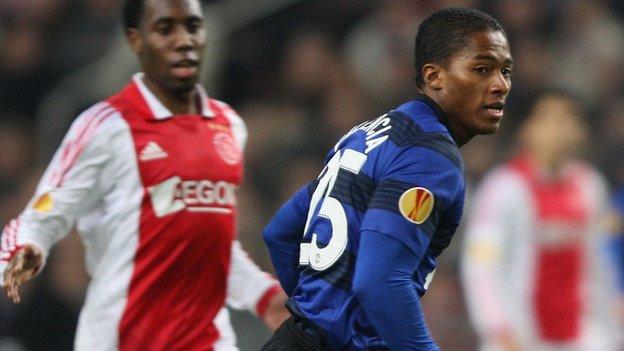 Manchester United's Antonio Valencia faces up to a month out of action after suffering a hamstring strain in their Europa League win against Ajax.

Second-half goals from Ashley Young and Javier Hernandez sealed a 2-0 victory in the Netherlands.

Substitute Valencia injured himself while combining to produce United's second goal in Amsterdam.

"It looks like a bad one," said manager Sir Alex Ferguson of the Ecuadorian's injury.

We didn't really hit any great heights, but we did improve in the second-half and we probably deserved to win it

With United leading 1-0 courtesy of Young's low shot just before the hour mark, Valencia had been on the field for just over 10 minutes when he supplied the ball to Wayne Rooney, who fed Hernandez for the goal.

While the visitors celebrated a valuable second away strike, Valencia was quickly replaced by Danny Welbeck.

The midfielder will now be out until mid-March and will miss the return leg with Ajax at Old Trafford on 23 February, as well as Premier League games against Norwich, Tottenham, West Brom and Wolves.

After the game, Ferguson described his side's performance at times as "very ordinary".

"We didn't play well at all in the first half," he added. "I'm delighted with the scoreline, but I think it was very ordinary.

"We didn't really hit any great heights, but we did improve in the second half and we probably deserved to win it."

Ferguson was particularly critical of the pace of his team's play in the first 45 minutes.

"We didn't have any rhythm in our game. Ajax pressed the ball well.

"We didn't get any tempo at all in the first-half. In the second-half we did improve, we made a few chances. It wasn't a brilliant performance but good enough I think."

Hernandez's goal, the second of the evening, puts United in a very strong position as they rest this weekend and welcome Ajax for the return fixture next Thursday.

"We are not taking anything for granted of course but at home, at Old Trafford, the opportunity to go through is a big one," Ferguson said.