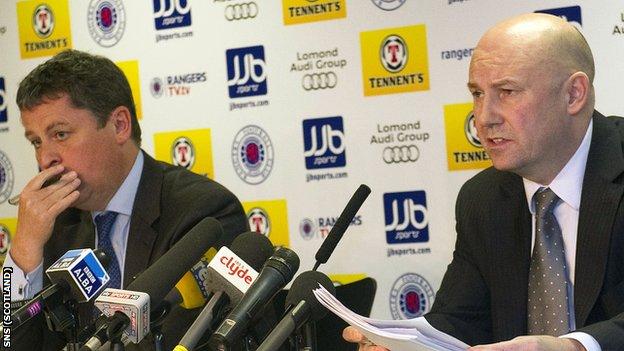 Administrators hope to have Rangers' finances in order in time to meet requirements for a Uefa licence to play in Europe next season.

Rangers need a Uefa club licence to compete in the Champions League or the Europa League - provided they qualify.

And they must produce a set of independently audited accounts before 31 March to be considered.

After a 10-point penalty for going into administration, Rangers sit second in the Scottish Premier League.

Third-place Motherwell are nine points behind Ally McCoist's team, with a game in hand.

If Rangers can provide the accounts in time, they might yet face difficulties if they remain in administration at the start of next season.

Administration does not automatically exclude a club from getting a licence but a number of complex criteria would have to be met, lowering the chances of success.

Rangers released financial figures through the Plus stock exchange on 30 November but those were unaudited accounts.

The club has also yet to hold an annual general meeting since Craig Whyte took control from Sir David Murray nine months ago.

On the subject of the club's accounts, joint administrator David Whitehouse said: "That is something that we are addressing at the moment because it is one of the requirements to retain European footballing status, that we complete those accounts.

"We will be doing everything we can to meet that [Uefa] deadline.

"At this moment, I can't give you a confirmation for certain but we will do everything we can, everything humanly possible.

"We understand the importance of that date."

There is no precedent for a Scottish club being refused a licence to play in Europe and the Scottish Football Association would have to decide on the allocation of Rangers' place should they qualify but not be permitted to participate.