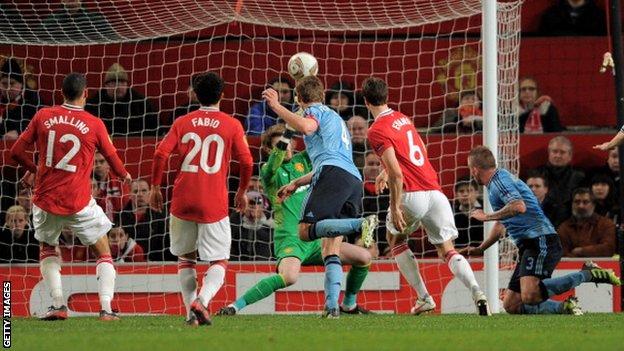 But they still advanced on aggregate to book a last-16 Europa League tie with Athletic Bilbao despite a nervous display.

Aras Ozbiliz levelled from 20 yards but Alderweireld's headed winner arrived too late for the Dutch visitors.

Although United remain on the road to Bucharest, the city chosen to host the final, the result took some of the gloss off to face the Netherlands in next Wednesday's friendly.

Pearce was at Old Trafford to witness four of the six - Tom Cleverley, Chris Smalling, Ashley Young and Phil Jones - all start against four-times European champions Ajax as Sir Alex Ferguson named an experienced side despite returning from last week's trip to Amsterdam with a two-goal cushion.

"Manchester United will be pleased because they've got through the tie. But they did all the hard work in Ajax last week. The sloppiness in the second half was almost because of the belief 'it's alright we will score and go through'. And the way they conceded the second goal will seriously peeve the manager. They've just done enough to get over the finishing line - but the manager will not be happy with that."

The highly damaging 3-3 draw with Basel during their doomed Champions League campaign earlier in the season - when United led 2-0 before falling 3-2 behind - ensured the manager left nothing to chance.

But Ferguson was once again left biting his fingernails as United made hard work of going through.

Yet the anxious finish was in stark contrast to their confident start as Berbatov, making a rare start in place of the ill Wayne Rooney, made up for lost time.

Having teed up a chance for Nani inside the opening minute, the Bulgarian striker threaded a delicious pass which allowed Hernandez to take his goal tally for the season into double figures with a composed sixth-minute finish.

Trailing 3-0 on aggregate, Ajax, a shadow of the side that once dominated Europe, appeared as though they were just playing for pride.

Frank de Boer's side created plenty of chances and United goalkeeper David de Gea was forced to earn his wages but, more times than not, there was no end product.

They should have been dead and buried in the 15th minute when Hernandez tried to return the earlier favour from Berbatov by attempting to set up the striker to make it 2-0.

But to the visitors relief, Hernandez's pass was cut out by Jan Vertonghen before any further damage could be inflicted.

In an entertaining game, De Gea saved well from Ozbiliz before the midfielder hauled his side back on level terms on the night after firing home from 20 yards with the aid of a deflection off Jones in the 38th minute.

That will not have impressed Ferguson, who has moaned recently about the number of sloppy goals his side have conceded.

United responded with Cleverley testing keeper Kenneth Vermeer, but the save-of-the-match came at the other end in the 58th minute as De Gea produced a stunning stop to keep out Siem de Jong's close range header.

It was a crucial moment. Had that gone in then United might have had problems.

As it was, Alderweireld's winner on the night, a powerful header from Ozbiliz's deep ball into area, arrived too late to cause any serious damage other than to United's pride.

But Ferguson knows his side will have to play better if they are to progress to the final.