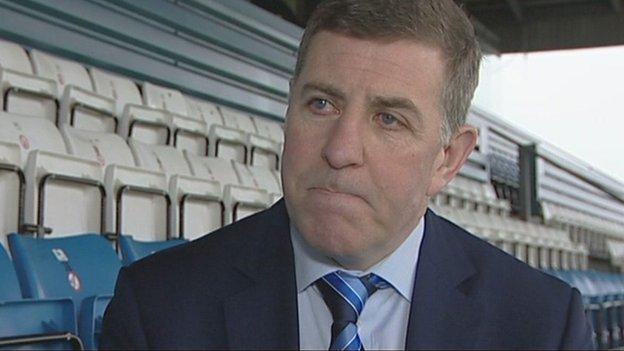 Bristol Rovers manager Mark McGhee has revealed he has been using players to investigate their League Two rivals.

One team member being utilised is injured loan defender Aaron Downes, who watched Saturday's opponents Oxford beat Dagenham and Redbridge 2-1 at the Kassam Stadium on Tuesday.

"Aaron has asked me if he can do that and it's a great asset for us," McGhee told BBC Radio Bristol.

"He's talked me through what he saw and gave us a comprehensive report."

McGhee added: "[Forward] Chris Zebroski was on his way to Morecambe when it was cancelled - it was a penance for his suspension."

Australian Downes, who is on loan from Chesterfield, has not played since 28 January after suffering a knee injury.

It was thought he would be ruled out for the rest of the campaign although McGhee said last week he could return by next month.

Zebroski has missed the last two games for Rovers after picking up 10 yellow cards over the season, but will return to face the promotion chasing U's on Saturday.

Since his appointment in January, McGhee has won three of his four games in charge but insists he is still learning about the strengths and weaknesses within the squad.

"For me, at the moment, the games can't come quick enough. Apart from the fact we've been doing well, it's a learning process for me," he added.

"You don't learn from one game but over time you improve because you see things you're able to work on.

"I need to look at different players and different combinations and getting as much information about them as I can."