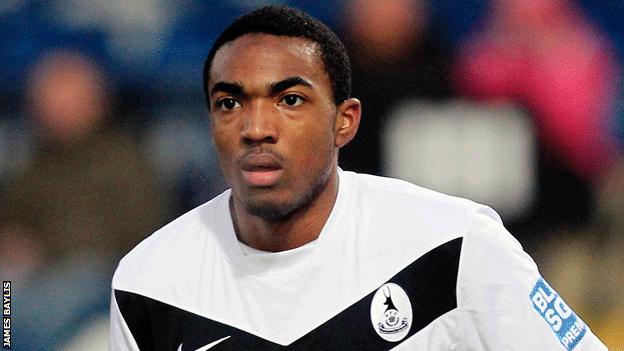 Telford boss Andy Sinton will hold talks with Bristol City to bring winger Marlon Jackson back to the club.

Jackson, 21, injured his hamstring in Telford's last match against Grimsby during his initial loan spell.

"I will be calling Derek McInnes on Friday," Sinton told BBC Radio Shropshire.

"Marlon's back training at Bristol, but he needs to be fit enough to go straight back into the team. If there's a chance of getting him back I will."

Jackson scored on his Telford debut in the 3-1 victory against Kettering at the Bucks Head. But his one-month loan was hampered by his hamstring injury.

"They thought there was a tear in his hamstring, but it's only a small one. A lot depends on what Bristol want to do and how his hamstring is after a weeks training," Sinton added.

The Bucks look set to be without midfielder Carl Rodgers for their league encounter against Braintree Town on Saturday.

Telford will leave it late to decide on whether Rodgers is fit enough to play after injuring his calf in training.