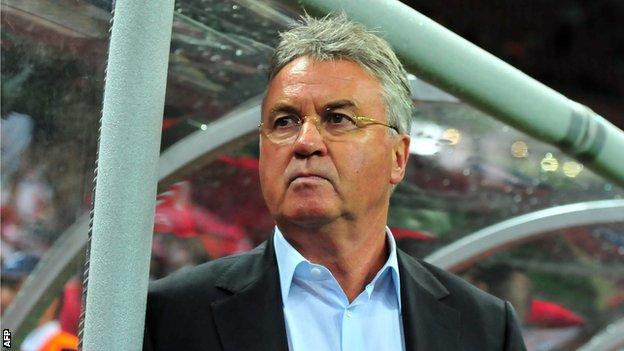 The 65-year-old former Russia boss has agreed a contract until the end of the 2012-13 season with the big-spending club who had been linked with ex-England boss Fabio Capello.

His predecessor, Yury Krasnozhan, resigned on Monday after less than two months in charge at Anzhi.

"I'm glad to accept such an opportunity," the Dutchman said.

Hiddink guided Chelsea to FA Cup success in 2009 during his caretaker tenure, having agreed a short-term deal when Luiz Felipe Scolari was sacked in February 2009.

Most recently, he managed Turkey but left that post when they failed to qualify for Euro 2012.

As well as being appointed chief coach, Hiddink will also serve as vice-president for development, the Russian club announced.

Hiddink, who returns to Russia nearly two years after his term as national coach ended, said: "At the end of last year, we had long discussions on Anzhi and that's why now I made a prompt decision.

"The most significant thing for me is that the club is building plans on football development in the republic. It's as much important as the sports result of the first team and I'm going to pay special attention to this direction.

"We spoke much with [owner] Suleyman Kerimov about this after which I realized what a huge project I was invited to."

The club, based in Russia's Dagestan republic which borders Georgia and Azerbaijan, was founded in 1991 and enjoyed little success until the arrival of billionaire Kerimov in January 2011.

The team's players live and train in Moscow due to security problems in Makhachkala and travel nearly 1,250 miles for home matches.

Anzhi are currently in seventh place in the Russian Premier League. Hiddink's first league fixture in charge is on 5 March against Dynamo Moscow when the season recommences after the winter break.