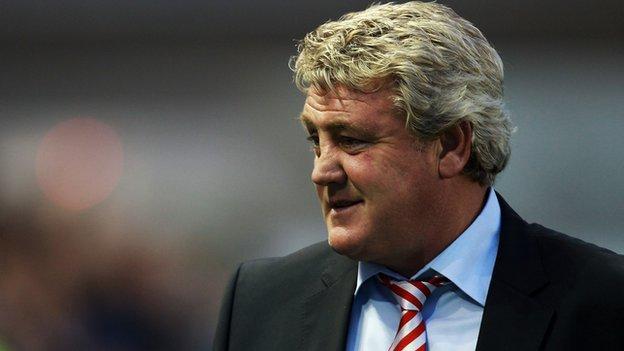 Chief executive Jez Moxey is confident Wolves will appoint a new manager to replace sacked Mick McCarthy before they play Newcastle on 25 February.

Former Sunderland boss Steve Bruce has been interviewed for the job along with Alan Curbishley and Neil Warnock.

Moxey said: "Our intention has always been to have a new manager installed in time to take charge for the Newcastle match and that remains the case.

Pat MurphyBBC Radio 5 live sports reporter
When trying to second guess the view of Wolves owner Steve Morgan, it is best to recall the words of the chief executive Jez Moxey in the aftermath of Mick McCarthy's sacking: "It's Steve's club and he can do what he wants."

"But I stress, we want the right candidate, not the quick candidate."

Moxey added: "Things are progressing. We are continuing to work to the timetable we indicated at the outset of this process and remain optimistic we will be able to fulfil those requirements."

Curbishley's son, Michael, tweeted that his father wanted the job but was not confident of getting it after meeting chairman Steve Morgan and Moxey on Thursday.

But the former Charlton and West Ham boss remains the bookmakers' favourite to take over.

Gordon Strachan, Walter Smith and Paul Ince have also been linked with the vacant manager's post following McCarthy's departure on Monday after five-and-a-half years at Molineux.

Wolves are in the bottom three with 13 games remaining.