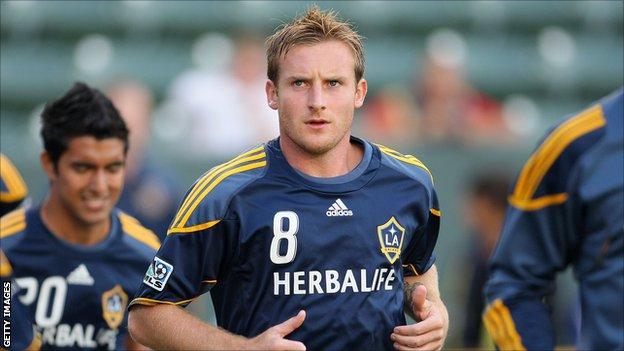 Port Vale have confirmed they are in talks to re-sign Chris Birchall, although they say reports that a deal is already done are "premature".

The midfielder, 27, left LA Galaxy earlier this month after turning down an offer of a new contract.

"Hopefully we can get something completed but we aren't there yet," said Vale boss Micky Adams.

Birchall played 91 times for Vale before leaving for Coventry, then managed by Adams, in August 2006.

Reports on Friday morning claimed that Birchall, who helped LA Galaxy to the MLS title last season, had signed a deal at Vale Park until the end of the season.

However, Adams told the club website: "I was surprised to read he had signed because international clearance had not arrived and we are still to sort out some other issues.

"I also smiled to myself when I saw he was playing for free, because you don't get anything for free in football."

Birchall began his career with Vale and played for Trinidad and Tobago at the 2006 World Cup in Germany.

His performances earned him a move to Coventry, where he spent two-and-a-half years, before being re-united with Adams at Brighton in January 2009.