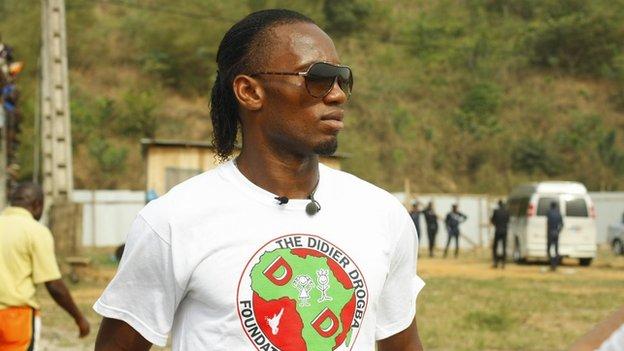 Ivory Coast captain Didier Drogba admits he finds it hard to talk about his penalty miss in the Africa Cup of Nations final.

The match finished goalless after extra time, and the much-favoured Ivorians lost on penalties to Zambia.

"It's really personal," Drogba told the BBC in Abidjan, before returning to London and his club Chelsea.

"The only thing that I remember is that we lost the final; everyone is sad and disappointed, it's a difficult moment."

We are far from next year, but if God gives me health and the fitness, I'll be there

The 2012 Nations Cup represented a massive opportunity for Ivory Coast's so-called Golden Generation - including Drogba, African Footballer of the Year Yaya Toure, Kolo Toure, Gervinho and others - to finally win a trophy.

Instead, despite not conceding a single goal throughout the tournament, they are once more left rueing what might have been.

"We had a good team and the way that we played - we had the confidence that we could do something, we could win it," Drogba said.

They failed to win the tournament but the team's efforts have still been acknowledged back home.

The Ivorian government declared the day after the final to be a national holiday and tens of thousands of fans cheered the team bus through Abidjan.

"You know when you lose, you don't expect people to come and support you, which means that these people are real fans," Drogba said.

"They really love their national team and we're really proud to see them and we really had a good feeling with them."

Drogba is returning to his club Chelsea for the time being but he remains closely involved in events in his homeland.

In the coming months, his Didier Drogba Foundation will start work on a US$4.7 million hospital in the main city Abidjan, with further clinics planned elsewhere in the country.

"I want to help my country, I want to contribute, I want to give something back to the people from Ivory Coast because they have been supporting me so much and I think that's something I'm really happy to do," he said.

Drogba is also a member of the country's Truth, Reconciliation and Dialogue Commission but still has ambitions for Ivory Coast on the football field - saying that he still dreams of one day lifting the Africa Cup of Nations, whether as a player or manager.

He has previously said he wants to play on until the 2014 World Cup.