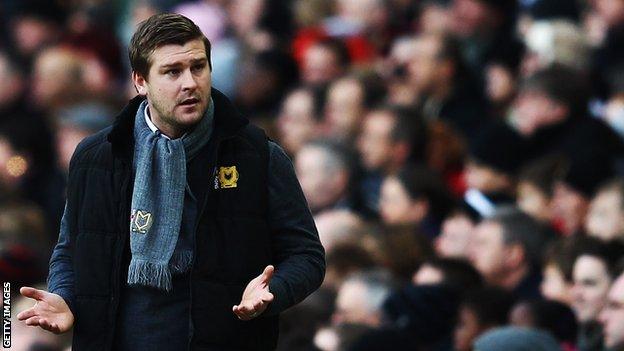 MK Dons boss Karl Robinson says he has not been approached by Huddersfield and is not interested in the manager's position at the Galpharm.

Robinson has been linked with the role at the fellow League One promotion hopefuls after Lee Clark's sacking.

"There will be a day when a job comes up and I'll think I've taken the club to where I want to take it and move on," he told BBC Three Counties Radio.

"But that's not at the moment. Everyone knows where my loyalties lie."

The 31-year-old added: "There's so many other chapters in my life that I need to fulfil before I move on and mature as an individual.

"It's a big club. The sacking of Lee Clark I don't agree with.

"What he's done is given the next manager arguably the best job in football.

"I spoke to him on Wednesday. I said 'I don't think you'll be unemployed for much longer'."

Robinson, who led the Dons to the League One play-off semi-finals last season in his first full campaign in charge, has won admirers for demanding that his side attempt to play attractive football.

That has seen him linked with a number of vacancies this term, including those at Nottingham Forest and Leeds.

But the Liverpudlian says he has not been distracted by seeing his name in the newspapers.

"It's a little bit annoying. But it's the nature of the industry," he said.

"There has been serious interest [from some clubs] but there hasn't been one that's come to the forefront of my mind."