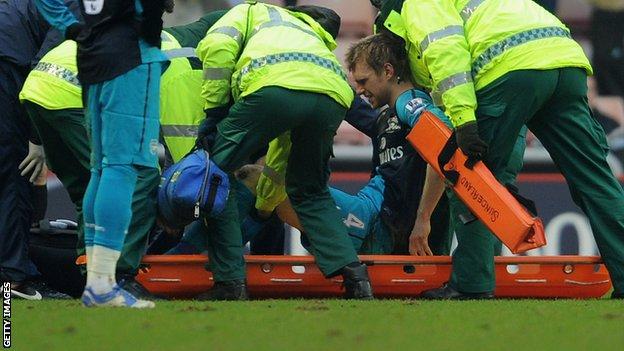 Arsenal defender Per Mertesacker has undergone surgery on his ankle injury and will be a "long-term" absence, according to manager Arsene Wenger.

Mertesacker suffered ligament damage during Saturday's 2-1 victory at Sunderland and could be sidelined for the rest of the season.

"He has had surgery and we have lost him for a while; how long I don't know," Wenger told the club's website.

"He had reconstruction of his ligaments, so it will be long-term."

Arsenal have major worries at the heart of their defence.

They are due to assess the state of Laurent Koscielny's knee injury after the Frenchman joined Mertesacker on the sidelines.

The French centre-back was withdrawn in pain during Wednesday night's 4-0 Champions League defeat by AC Milan at the San Siro.

Wenger's options at the back are threadbare, with fellow centre-back Thomas Vermaelen still short of full match sharpness.