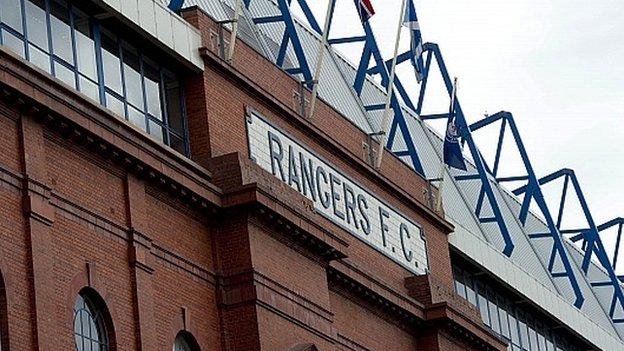 The Scottish Football Association is to hold an independent inquiry into the activities of Rangers.

In December, the SFA said it would investigate Craig Whyte after the Rangers owner admitted that he had been disqualified as a company director.

Now Rangers are in administration, the governing body says it is looking into "potential breaches of the SFA's articles of association".

"We are concerned by the developing situation," read an SFA statement.

"We have been guaranteed full co-operation by Paul Clark, representing the company.

"The Scottish FA's previous efforts in obtaining information relevant to the Fit and Proper Person requirement has been restricted by the club's solicitors' continued failure to share information in a timely or detailed manner.

We expect the investigation to be concluded as quickly as possible

"We now feel there is no option but to undertake an independent inquiry to establish the clear facts and to determine the extent of any possible rules breaches."

Regan added: "Since we have been unable to receive any detailed information requested in relation to Article 10, we feel we have no option but to appoint an independent committee to investigate a number of concerns we have raised.

"Finally, I would like to reiterate the need to learn the lessons from this unedifying episode. It is essential that we work together to improve the overall sustainability and competitiveness of the game in this country. This is a matter that the Scottish FA is already in discussions with the relevant league bodies to address."

Paul Clark, joint administrator at Rangers, later said: "We welcome the announcement by the SFA and believe it will be in the best interests of Rangers and Scottish football.

"As administrators of the club we will co-operate fully with such an inquiry, subject to the terms of reference, and have indicated this to the SFA."

BBC Scotland broke the news of Whyte's disqualification as a company director.

And the Ibrox club confirmed the seven-year ban in a statement to the PLUS Stock Exchange on 30 November.

The SFA has rules regarding office-bearers of member clubs.

Their articles of association state: "The board must be satisfied that any such person is fit and proper to hold such position within association football.

"The board... reserves its discretion as to whether or not such a person is fit and proper... after due consideration of all relevant facts which the board has in its possession and knowledge including... he has been disqualified as a director pursuant to the Company Directors' Disqualification Act 1986 within the previous five years."

Item 123 of the SFA's articles of association states that "the board has the power to fine, suspend or expel any recognised football body, club, official, player, referee or other person under the jurisdiction of the Association who has brought the game into disrepute".

Item 124 states that "for an infringement of any of the articles, a recognised football body, club, official, player, referee or other person under the jurisdiction of the association is liable to a censure, fine, suspension or expulsion - or any combination of these penalties - as the SFA considers appropriate in order to deal justly with the case in question".