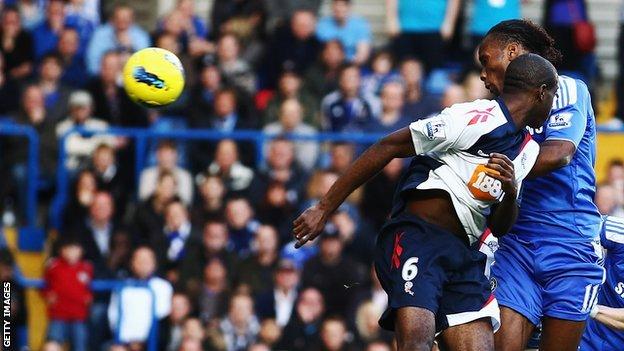 Chelsea turned on the style in the second half to ease past Bolton and end a run of five games without a win.

Bolton frustrated the Blues before the break but David Luiz's fine curled shot put the hosts ahead in the second half.

The visitors, whose best chance saw Nigel Reo-Coker fire wide after the break, remain 19th in the table but are above Wigan only on goal difference.

Bolton's hopes of pulling off a shock win - and a first over Chelsea since 2003 - looked good after a solid defensive first-half display in which new signing Tim Ream and David Wheater excelled.

However, victory for under-fire Chelsea manager Andre Villas-Boas was never in serious doubt once his side went ahead, despite a nervy opening 45 minutes.

Chelsea's Premier League title hopes have faded but, with their Champions League future in serious doubt following midweek defeat by Napoli, losing against Bolton was unthinkable for Villas-Boas in front of watching owner Roman Abramovich.

The hosts began with much greater intent than in many of their recent games.

Lampard, given the captain's armband in the absence of the injured John Terry, and Michael Essien were restored to the centre of midfield and their tenacity and energy were the main factors in the Londoners dominating the opening stages and eventually securing a comfortable victory.

Daniel Sturridge, who scored eight goals in 11 league starts during a loan spell at Bolton last season, was once again Chelsea's chief threat and was involved in all of their best moments before the break.

Chelsea's joint-top scorer tested visiting keeper Adam Bogdan with a low 18-yard strike and forced a decent diving save from the Hungarian when he cut inside and hit a curling strike towards the far corner.

Sturridge also teed up a chance for Lampard, who chose to stay on his feet rather than go down under a challenge from Bogdan and was eventually crowded out.

The visitors offered little in attack but looked lively on the break and could have led in first-half stoppage time when Ryo Miyaichi fired over at the near post.

But Bolton, who have now lost 18 of the 19 league games in which they have fallen behind in so far this season, trailed within three minutes of the restart and never really recovered.

The Londoners went ahead following a marauding run on the left by the much-maligned Luiz.

The Brazilian won possession and found Ashley Cole out wide and, when Cole's cross fell kindly to him, Luiz stepped inside and curled a beautiful effort into the the far corner.

While the defender's ability at the back has been questioned, there is no doubting his threat at the other end and he almost headed a second but was denied by a combination of Miyaichi's foot and the post.

Reo-Coker could have drawn the Trotters level almost immediately only to screw an effort wide.

Drogba clipped the top of the bar after a sweeping breakaway started by Petr Cech's long throw, but moments later the Ivorian did have his goal when he powerfully headed home Lampard's corner.

Lampard grabbed his 10th league goal of a stop-start season when he steered in Mata's inviting cross and, although the Blues, who move up to fourth in the table, had plenty of other chances, they could not add to their lead.