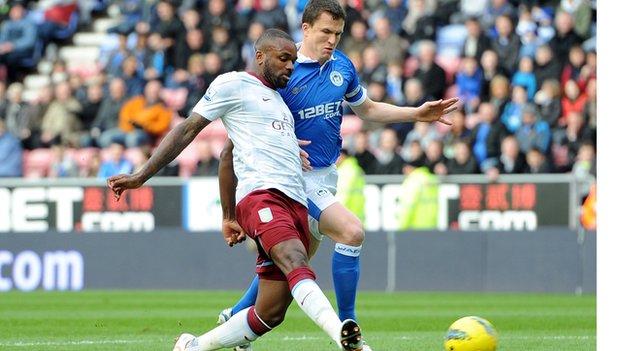 Wigan remain bottom of the Premier League after failing to capitalise on their dominance of Aston Villa at the DW Stadium.

The game ended goalless but the scoreline belied an open and entertaining match.

The best chance fell to Villa's Darren Bent, who later went off with an but his first-half shot was saved by Ali Al Habsi.

Wigan have now gone 11 Premier League matches at home without a win.

Bent appeared in agony when he was taken off on a stretcher after a challenge from Antolin Alcaraz, and Villa manager Alex McLeish confirmed after the match that he will not play in England's friendly against the Netherlands on Wednesday.

For all Wigan's possession, it took until the final quarter of the match for Villa goalkeeper Shay Given to be pressed into firm action, saving from substitute Hugo Rodallega when he turned and shot from the edge of the box, and stopping Franco di Santo's skimming effort.

The hosts' performance deserved a better return but their final ball was often lacking, with over-hit crosses, scuffed shots and some last-ditch defending from Villa.

Wigan beat Bolton on their last outing, while Villa were aiming for their first league win in four matches.

Villa are only three places out of the relegation spots, and both sides' desire for three points was reflected in the tempo of a match that was pleasing on the eye.

Robbie Keane, playing his last game on loan before heading back to LA Galaxy, could have scored a farewell goal but his 25-yard daisy-cutter, which was sneaking in the bottom corner, was pushed away by Al Habsi.

The Oman keeper was forced into action again when Bent wasted a great chance to open the scoring after being put through by a perfectly weighted pass from Keane.

After Villa's initial chances, Wigan dominated the remainder of the half and there was a great tussle down the Latics' left flank between Victor Moses and Alan Hutton.

But Wigan could not find a decisive final ball, illustrated by the fact they have scored only 11 goals at home this season and have not recorded a league victory at the DW since August.

The second half was a mirror image of the first with Wigan dominating for lengthy periods and having a penalty appeal for handball turned down when Di Santo's shots were charged down by James Collins and Gary Gardner.

Clean sheets were welcomed by both teams but one point apiece did neither many favours, with Wigan left frustrated and Villa fans booing McLeish at the final whistle.

Aston Villa manager Alex McLeish said on the booing at the final whistle: "Nobody likes it, I can't say it is water off a duck's back and I don't mind it.

"I understand the modern-day thinking but I am not going to get into a spat with my own supporters. I need those guys."

On the match: "I thought we had the better chances and I'm disappointed we didn't take any of those. It would have been good if Robbie had scored a farewell goal but it just eluded him. We thanked him in the dressing room afterwards for what he's done.

"He's clearly a thinker and he's definitely got the speed in his brain.

On Bent's injury as Keane departs for the United States: "You can't legislate for that. You have have to get on with it."

Wigan manager Roberto Martinez on the match: "In this situation you need to look at the good things and it was a good clean sheet. The individual quality of their players and their pace, I thought the way we kept clean sheet was outstanding.

"We then controlled the game and that's pleasing against a team like Aston Villa.

"We had very good possession, 14 corners, which showed a real attacking threat but hitting the back of the net was that little bit of fortune we needed and we didn't get that today."