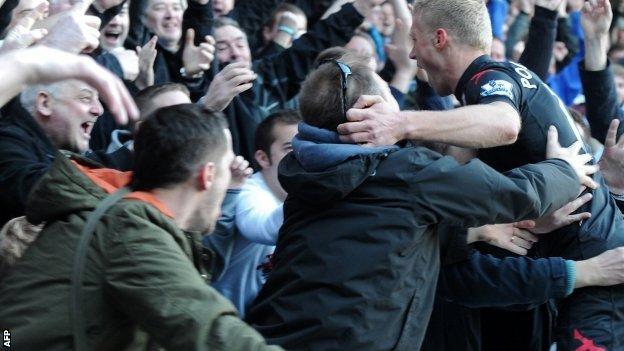 A fifth red card of the season for a QPR player at Loftus Road ensured Hoops manager Mark Hughes suffered defeat against his former club Fulham.

And Rangers were reeling when debutant Samba Diakite was dismissed for a second yellow card in the 32nd minute.

Paddy Kenny was the busier goalkeeper - notably saving from Danny Murphy - though QPR might have snatched a point when Shaun Wright-Phillips shot wide.

Defeat means Hughes' side have picked up just four points from a possible 18 since the Welshman took over from Neil Warnock in January.

It was a miserable afternoon for the former Blackburn and Manchester City manager, who left the Cottagers in 2011 after just one season in charge, hinting that he didn't think the club could match his ambitions.

The result underlined Fulham manager Martin Jol's pre-match assertion that his club have a greater Premier League stature than Rangers.

QPR proved more competitive as a team after Diakite's dismissal - he was red-carded after picking up a second yellow card for fouling Bryan Ruiz - with Fulham enjoying plenty of possession, but failing to capitalise on their numerical advantage.

QPR are in deep trouble after another home defeat. They always had a mountain to climb after the sending off of Samba Diakite, who looked a little naive and has a lot to learn in the Premier League.

The game was never out of reach but QPR did not do enough to test Fulham, who looked like the more competent Premier League side.

It was QPR's second home sending off in a row after Djibril Cisse's dismissal against Wolves. Clint Hill,Armand Traore and Joey Barton have also been red-carded at Loftus Road this season.

For large parts of the second half it was hard to remember Kenny making a save, though in the closing stages gaps did begin to appear in the home side's defence with substitute Dickson Etuhu running clear only to shoot wide.

In the first half, Kenny had made an important block to push away Danny Murphy's shot as Fulham threatened to give their neighbours a second mauling following their 6-0 win over QPR at Craven Cottage earlier in the season.

Andy Johnson scored a hat-trick in that game and, returning to the Fulham side for the first time since 27 January, he flicked a header past Kenny into the net only to be ruled offside.

Dembele was at the heart of Fulham's good work in an impressive start and it was his backheel that created Pogrebnyak's goal.

With his back to goal there seemed little danger but the Belgian international's vision and technique ensured the ball put the Russian international in the clear, with Pogrebnyak letting Kenny go to ground before rolling his shot into the net.

Ruiz and Clint Dempsey were also prominent in those early Fulham attacks and the United States international almost added a second after a run and shot.

Fulham goalkeeper Mark Schwarzer was tested just once in the first half, saving well from a Wright-Phillips shot and then reacting quickly to block Bobby Zamora's follow-up, though the QPR striker had strayed offside.

Schwarzer did not have much to do in the second half, though he held his ground well to narrow the angle when Wright-Phillips spurned a late chance to draw level.