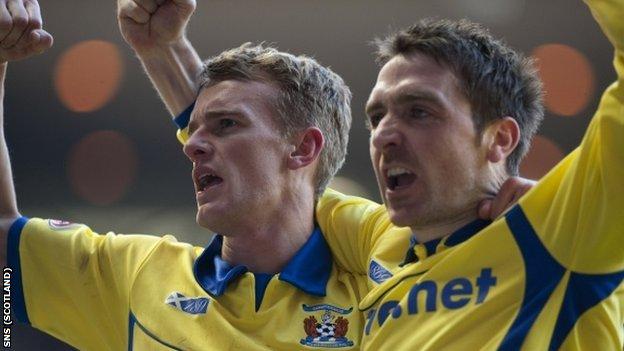 Kilmarnock boss Kenny Shiels dedicated the win over Rangers to the club's supporters to avenge a defeat from last season.

Rangers clinched the league title last term with a 5-1 thumping at Rugby Park and Shiels said he owed the fans.

"I had to pay them back in some capacity because I was responsible for that defeat," he told BBC Scotland.

"To see your supporters leave after seven minutes, I felt responsible."

The Kilmarnock boss added: "To win home and away against Rangers in the same season gives our supporters a lot of satisfaction."

Dean Shiels scored the only goal of the game on an afternoon where defender Sasa Papac was given his marching orders.

"Tactically we were outstanding," Shiels said. "We did our homework and the crowd were so much behind Rangers.

"But we nullified quite a lot of areas in their team."

Shiels said the Ibrox playing surface was conducive to his side's desire to play a passing game, adding that it was a major factor in the victory.

"It's a great pitch for our product and our boys did really well," he added.

"I was disappointed we went in at half-time 1-0 because we were inventive and created a lot of chances. I thought: 'here we go again' because so often this season we've conceded injury-time goals and I was worried."

Shiels praised his son Dean for an "oustanding" performance and said he proved a thorn in Rangers' side throughout the game.

"He caused them so many problems and we successfully freed him up," he added.

"But Rangers have got quality players and we can't overlook the enormity of our performance today."