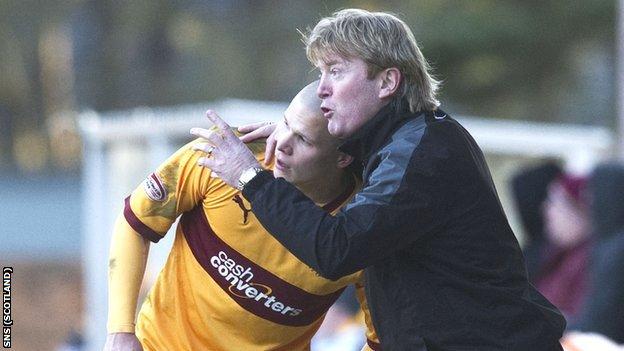 Stuart McCall is urging his Motherwell players not to let up in their quest to finish third, or higher, in the Scottish Premier League.

The Steelmen beat Hearts 3-0 even though their midfielder Keith Lasley was sent off with 40 minutes to go.

With a game in hand, McCall's team are six points behind Rangers and nine clear of fourth-placed Hearts.

"We are certainly in the driving seat. We knew how important this game was," he told BBC Radio Scotland.

Motherwell were last defeated on 14 January, a 1-0 reverse to Inverness Caledonian Thistle, and since then they have earned 11 points from 15 in the SPL and have hammered Morton in the Scottish Cup fifth round.

Hibernian are the visitors to Fir Park in midweek on league business and the manager is keen for the players to remain focused.

"It's a huge game on Wednesday night. Hibs will come here fighting for their lives," he said.

"If we could win that, it would put us 12 points clear of Hearts and that would be a good gap at this stage of the season.

"We'll ask the players not to get carried away."

Asked if he was now eyeing second spot following Rangers' 1-0 defeat to Kilmarnock on Saturday and their 10-point deduction as a result of their entering administration, McCall was guarded.

"We just look at the next game," he said. "If we can produce a performance like today, I'll be chuffed. I am a pleased manager tonight.

"There will be resting on our laurels. It can be a big season for us if we keep the foot on the gas.

"We have a quarter-final coming up against Aberdeen in a few weeks.

"We had a little dip, went fifth at one point, but we have to make sure that we have no more blips and keep marching on.

"The crowd were terrific for us, singing from all sides of the stadium, which is great to hear."

The Motherwell goals came from a Lasley strike that deflected off Andy Webster, a Jamie Murphy header and a Nicky Law shot.

"Not many teams score three against Hearts - they are a strong side at the back - but it could have been more.

"I thought big Higdon led the line terrifically, up against two excellent centre-halves. For the most part, he got the better of them."

Lasley was booked for a foul on Ian Black midway through the first half and was sent packing for another challenge on the same player soon after the break.

"We mentioned it to Keith at half-time to keep a lid on it, but he is that type of player," he added.

"I haven't seen it again, but from what I saw it was a foul and no more, in my eyes.

"We have no complaints about the first booking, but I thought the second booking was very harsh."