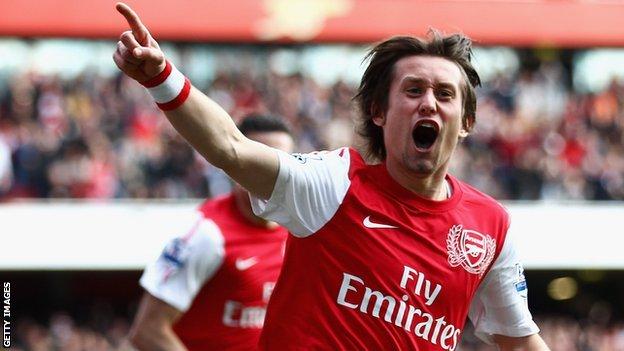 Arsenal recovered from two goals down to thrash Tottenham in an enthralling north London derby at Emirates Stadium.

Spurs - in the ascendancy over Arsenal for so much of the season - looked to be on course for the first back-to-back league wins at the home of their arch-rivals for 86 years as an early goal from Louis Saha and Emmanuel Adebayor's penalty put them in a commanding position within 34 minutes.

At 2-0 up Tottenham were in dreamland. But what a comeback, with five goals in an astonishing 27-minute-spell. It will not bring Arsenal any silverware but they may have found the road to redemption from an epic north London derby that ebbed, flowed and surged as this fixture often does. Arsenal have won back their pride.

But Arsenal, under so much scrutiny after their 4-0 Champions League thrashing against AC Milan in Italy and their FA Cup exit at Sunderland, mounted a comeback that combined resilience and character with dazzling attacking football to humiliate Harry Redknapp's side.

Bacary Sagna's header and a world-class strike from Robin van Persie put Arsenal level before the interval - and set up a second-half display that left Spurs beaten long before the end.

Tomas Rosicky put Arsenal in front just after the break and the rout was completed by a quickfire double from Theo Walcott, goals that silenced the taunts he suffered from his own supporters in the first half.

Spurs, who came from two goals behind to beat Arsenal 3-2 at Emirates Stadium last season, ended with 10 men when Scott Parker was sent off late on.

But the points had already been decided as Arsenal's reward came in the shape of this rousing victory and a place in the Premier League's top four.

It was the second time this season Arsenal hit five against a fellow London team, following their 5-3 victory over Chelsea in October.

Manager Arsene Wenger will take renewed confidence that his side can claim a Champions League place next season after the manner of this win, but the valid question will also remain about why Arsenal have produced such quality so rarely this season.

For Redknapp, with Football Association chairman David Bernstein in the stands as he continues the search for Fabio Capello's successor, this was a chastening afternoon.

The flair and strength that has characterised so much of Spurs's season was conspicuous by its absence as Arsenal threatened to extend their emphatic victory margin.

Redknapp will hope this will simply be an interruption to their impressive progress but he will have been horrified by the ease with which his side was dismantled.

Arsenal's confidence, perhaps fragile in the face of those damaging defeats, was hardly helped by the concession of such a cheap goal inside four minutes. They were left horribly exposed as referee Mike Dean played a fine advantage, allowing Kyle Walker and Adebayor to play in Saha, whose shot was deflected off Thomas Vermaelen over the wrong-footed Szczesny.

The Gunners, however, responded with real spirit as Van Persie sent a close-range shot so close that many Arsenal supporters celebrated prematurely and Rosicky's flicked header was superbly turned over by Brad Friedel.

Spurs, despite Arsenal's good reaction, looked to be cruising 11 minutes before the interval when referee Dean pointed to the spot as Gareth Bale tumbled theatrically under Szczesny's challenge as he pursued a pass of precision from Luka Modric.

Adebayor ignored the protests and jeers of Arsenal's fans to score coolly - but that was the end of the good news for Spurs.

Arsenal's response was ferociously committed, but Spurs collapsed with a speed - and on a scale - that will have startled Redknapp as much as it delighted Wenger.

Van Persie struck the post after being set up by Walcott, but the goal arrived seconds later as Sagna arrived at pace to send a thumping header beyond Friedel from Mikel Arteta's cross.

Arsenal's play was gathering an unstoppable momentum, epitomised by Van Persie's stunning finish, curled away from the diving Friedel two minutes before half-time.

Redknapp took strong action to halt the switch in fortunes, sending on Sandro and Rafael van der Vaart for Saha and Niko Kranjcar - but Spurs had already gone into terminal decline.

Arsenal were in the ascendancy, Friedel saving well from Yossi Benayoun before Rosicky was quicker than Ledley King to react to Sagna's cross and score at the near post after 50 minutes.

With Spurs reeling, Walcott struck twice inside three minutes to transform that early anxiety into a carnival atmosphere inside Emirates Stadium.

Walcott recovered from a poor first touch to send a neat finish past Friedel and was swiftly on target again as he scored with a low shot before being submerged by jubilant team-mates.

And to complete Spurs's misery, Parker was sent off after receiving his second yellow card for a foul on Vermaelen and he will now miss the game against Manchester United at White Hart Lane next Sunday. A day to forget for Redknapp - but one that might be of some significance for Wenger and Arsenal as they set their sights on fourth place.