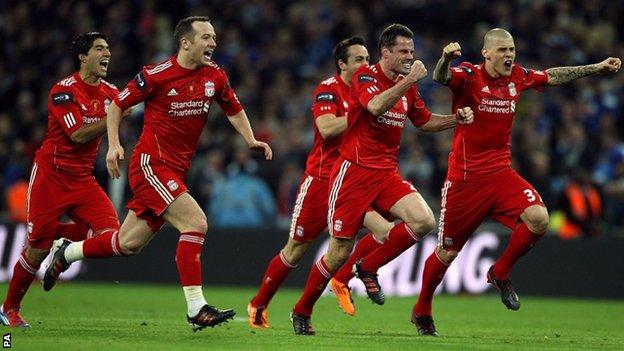 Kenny Dalglish won the first silverware of his second spell as Liverpool manager after his side came through a compelling Carling Cup final to beat Cardiff City on penalties.

Anthony Gerrard missed the final kick of a dramatic penalty shoot-out to hand victory to the Merseysiders - their first trophy since the 2006 FA Cup - but it was a cruel way for the Welsh side to be beaten.

The Championship outfit took a surprise first-half lead through Joe Mason and defended valiantly, even after Martin Skrtel had levelled on the hour mark.

Dirk Kuyt thought he had won it for Liverpool with an instinctive extra-time finish, but Ben Turner bundled home at the death to force penalties.

Even then, Liverpool seemed determined to do things the hard way, with Steven Gerrard - Anthony's cousin - having his effort brilliantly saved by Tom Heaton, before Charlie Adam blasted over.

After Kenny Miller hit the post, Don Cowie sent Pepe Reina the wrong way to give the Bluebirds the advantage after two spot-kicks apiece.

But, while Kuyt, Stewart Downing and Glen Johnson all found the net, Cardiff missed two of their next three penalties, with Rudy Gestede also hitting the woodwork before Anthony Gerrard's miss proved decisive in handing Liverpool their eighth League Cup.

It means that, 13 months after he returned to the Anfield hotseat, Dalglish becomes only the seventh manager to win all three major competitions in England.

This triumph was one of the closest of his managerial career - and almost ruined their first visit to Wembley for 16 years.

After Steven Gerrard surged out of his own half, Johnson bent in a shot which beat Heaton but came back off the underside of the bar, with Gerrard firing the follow-up over.

Cardiff were being pegged back and, with Downing and Jordan Henderson seeing plenty of the ball, Liverpool aimed a succession of crosses towards Andy Carroll.

But, as has so often been the case this season, there was no end product to their attacks, and Cardiff began to find a foothold in the game.

The Bluebirds had already threatened through Miller, who ended a neat passing move by swivelling to blast over from the edge of the box, when Mason put them ahead in the 18th minute.

A poor defensive header by Skrtel was picked up by Kevin McNaughton and, from his pass, Miller set Mason free to power his low shot under the onrushing Reina.

Even finding themselves trailing unexpectedly did nothing to improve Liverpool's productivity in the final third, however, and Cardiff's defence - expertly marshalled by Mark Hudson - largely kept them at bay.

Frustration was visibly growing among the Liverpool fans, and the biggest surprise when Craig Bellamy came off the bench just before the hour mark was that it had taken Dalglish so long to bring him on.

An equaliser followed almost immediately, although the Welshman had nothing to do with it.

From Downing's corner, Luis Suarez glanced Carroll's header on to the post and Skrtel was first to the rebound, taking a touch before driving the ball between Heaton's legs.

Liverpool continued to drive forward but Cardiff were not about to crumble and had the better chances at the end of the 90 minutes.

Cardiff's exertions began to catch up with them in extra time, with Hudson being forced off by cramp and Liverpool enjoying a flurry of chances.

Heaton tipped Suarez's shot wide and Andrew Taylor had to clear the Uruguayan's header off the line from the resulting corner, while Carroll, Bellamy and Johnson were all narrowly off target with their efforts.

In the 108th minute, Cardiff finally cracked. Kuyt's shot was blocked by Anthony Gerrard, Hudson's replacement, but the ball came back to the Dutchman, who powered the ball past Heaton to put his side ahead.

But that was not the end of a thrilling tale. Kuyt was on hand to clear off the line as Cardiff pushed forward with one last effort and, from the resulting corner, he could not stop Turner bundling the ball home to take the game to penalties.