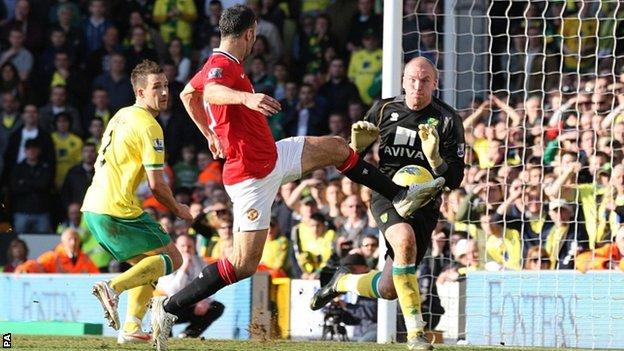 Ryan Giggs marked his 900th appearance for Manchester United with a dramatic late winner as Sir Alex Ferguson's side closed the gap on leaders Manchester City to two points.

Grant Holt levelled for the Canaries late on when he held off Rio Ferdinand to turn and fire into the top corner.

But there was still time for Giggs to steal the points when he converted Ashley Young's cross at the far post.

Giggs, who made his league debut 21 years ago next month, was impressive throughout and had already hit the crossbar with a cushioned volley in the second half before his stunning late intervention.

But the result was harsh on a Norwich side who caused United no end of problems and were only denied further goals by the excellence of goalkeeper David de Gea.

The Spaniard pulled off fine saves to deny Holt, Anthony Pilkington and Aaron Wilbraham before he was finally beaten by Holt with just seven minutes left.

That goal kicked United into gear and, when Young whipped in a dangerous cross from the left, Giggs arrived unmarked to clip the ball through John Ruddy's legs.

Ferguson's side had seen City move five points clear with their on Saturday and started in the manner of a side eager to close the gap.

Ryan Giggs in the Premier League

Giggs came close to a spectacular opener inside five minutes when he arrived on Phil Jones' cross but volleyed high and wide at the back post.

Jones was not even born when Giggs first featured for United, but the young defender played his part moments later as another veteran put the champions ahead.

Scholes spread the ball out to Jones on the right, who laid the ball back to Nani. The winger took a touch before delivering a teasing cross which evaded Javier Hernandez and Danny Welbeck but not Scholes, who timed his run to perfection to arrive unmarked to head into an open goal.

Scholes was at the heart of everything from United in the opening half, and his surprise decision to come out of retirement last month is already looking like a masterstroke for the champions.

Welbeck was denied by a fine save from Ruddy, but it was the hosts who bossed the rest of the half and only some brilliant goalkeeping kept United head.

First De Gea saved with his feet to keep out Pilkington's shot, before he held on to Holt's close-range header.

Norwich were unable to apply the same pressure after the break, and Welbeck came close to a second when he collected a perfect Giggs through-ball but saw his chip cleared off the line by Zak Whitbread.

The sole slack pass of the afternoon from Scholes led to Wilbraham testing De Gea with a rising 20-yard strike, before Norwich did find a way through.

A corner was half cleared, Adam Drury pumped the ball back in to the area and, when Whitbread headed on, Holt showed great touch and strength to turn Ferdinand and thrash his left-footed shot into the top corner.

The joy was shortlived for Norwich fans, however, as Giggs signed off the latest chapter in his incredible career with his 107th Premier League goal to keep him in the hunt for a 13th league medal.

"We were excellent but that's what happens against United.

"They've done that for years and years. We were running on empty at the end but we put in a massive effort.

"There is nothing to be ashamed of, we gave a really good account of ourselves."

"Norwich deserved a point today and it was a great goal they scored, but at that moment you saw us as Manchester United.

"I am sure this result will have an impact on the season.

"Everyone knows we never give in, no matter who plays us, they know they will have to play right to the death."