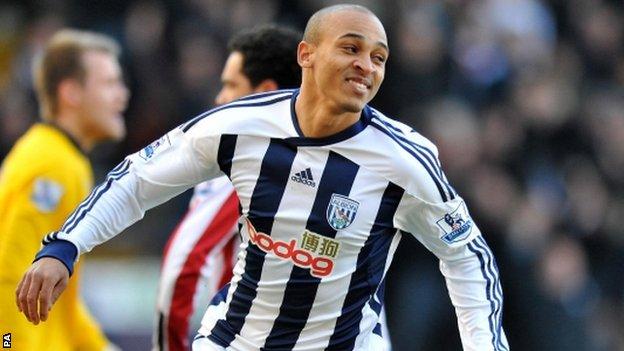 Martin O'Neill's side had won five of their last six away games but were behind inside three minutes through Odemwingie's header.

James Morrison doubled the lead with another header, before Odemwingie drove in shortly after the restart.

Sunderland - who left on the bench - then saw Keith Andrews hit a late fourth.

West Brom went into the game boasting a dreadful home record - having scored just nine goals at the Hawthorns all season - but were well on top from the kick-off.

Sunderland had no answer to Albion's combination of slick passing and intense pressing all over the field and were fortunate to go into the break only two goals down.

The decision to start with Stephane Sessegnon as a lone striker backfired as the Benin international failed to retain possession and constantly dropped deep in search of the ball.

O'Neill sent on strikers Campbell and Nicklas Bendtner at half-time in a bid to salvage something from the contest but Odemwingie's second goal three minutes after the restart snuffed out any hopes of a comeback.

To their credit, the visitors kept going in an increasingly open second half and should have pulled a goal back late on when Campbell's strike was incorrectly ruled out for offside.

But Roy Hodgson's men remained a threat on the break and grabbed a fourth goal in stoppage time when Andrews fired into the roof of the net.

Sunderland have been rejuvenated since O'Neill arrived in December and retain an outside chance of qualifying for the Europa League, but this display was a world away from their

Odemwingie hit a hat-trick in the and the Nigerian took less than three minutes to score again.

Jerome Thomas's fine cross from the left wing was only half cleared and, when the ball was recycled back to Youssuf Mulumbu, he was able to drill in a cross which was headed home by Odemwingie who had ghosted in between Michael Turner and Kieran Richardson.

Morrison then tested Simon Mignolet from 20 yards before Albion found the second goal their dominance deserved.

The move started with goalkeeper Ben Foster's fine pass out to Liam Ridgewell on the left wing. The former Birmingham man was tripped, but referee Chris Foy allowed play to go on and, when Thomas swung over another excellent delivery from the left, Morrison arrived to send a header back across goal and into the far corner.

Foster's distribution also led to the third goal. His throw to Morrison started a rapid counter-attack as the Scotland midfielder found Marc-Antoine Fortune inside the area and, when he turned the ball across the box, Odemwingie arrived to thump in with the aid of a slight deflection.

Thomas cut inside from the left and curled a shot against the crossbar as Sunderland's attacking line-up left the midfield wide open.

Campbell thought he had pulled one back when he shot against the underside of the bar following Bendtner's pass, but any debate over whether the ball had crossed the line was saved by an incorrectly raised offside flag.

Andrews had the final say when he was found by substitute Graham Dorrans and cracked home his second goal in two appearances for the club.

"We got a great start. Scoring early on gave us the start we needed and we were able to build on it.

"Sunderland worked hard to get back into the game, they put forwards on the field but that gave us the chance to counter attack and score more goals.

"Our home form has been poor and it was a much-needed win. We mustn't rest on our laurels - we've got Chelsea next."

"We didn't start well at all today and we played sloppily. West Brom were much better than us and deserved to win.

"It was a poor day for us and I hope that we can learn something from it. We were second best and we didn't deserve anything from the game.

"The third goal killed any chances of us getting back into the game. But it's very difficult to criticise the players after their efforts over the last few months."