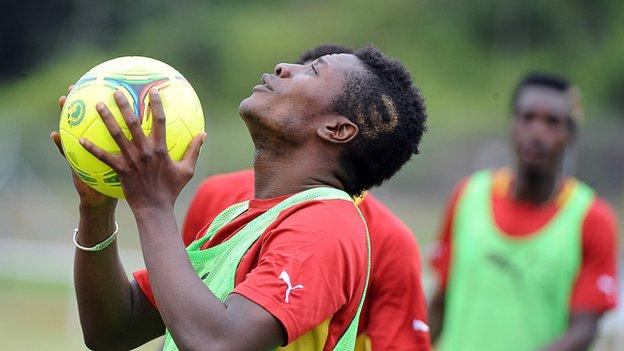 Ghana star Asamoah Gyan has admitted he "never recovered" from the disappointment of the 2010 World Cup.

The striker missed a penalty which would have taken Ghana through to the semi-finals of that tournament.

He has taken an "indefinite break" from international action after his recent miss in the semi-final of the Africa Cup of Nations against Zambia.

He received sustained abuse from some Ghana fans following their failure in Equatorial Guinea and Gabon.

"Psychologically I am down," the player admitted in a statement on Twitter.

"As you can imagine it's been very hard for me mentally, to miss two important successive penalties for my country," the statement said.

"Because of this, a break to recoup my thoughts and emotions will aid me to come back bigger and mentally stronger.

"I never fully recovered from the 2010 World Cup and now the 2012 [Africa Cup of Nations]," the player admitted.

Ghana's Football Association (GFA) announced it was going to hold talks with the player as soon as he had revealed his decision to take a break from the Black Stars and he has not closed the door on a return.

"I want my country to know I love playing for them and I wouldn't be who I am without them," Gyan said.

"I would like to ask for prayers and support from Ghanaians to help me to come back with a renewed strength to continue serving my country."