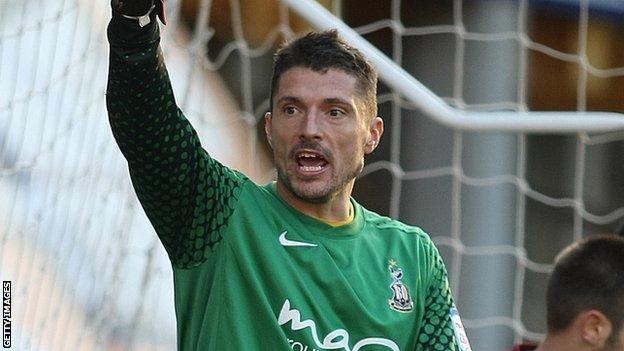 Northampton Town have signed Bradford goalkeeper Matt Duke on loan until the end of the season.

The 34-year-old played in the Premier League with Hull and has made 13 appearances for the Bantams in the current campaign.

"I'm extremely happy to have a player of his calibre and character join us."

Duke made 59 appearances in seven years for Hull prior to his move to Bradford last summer.

"In terms of character, it's one of the most important positions on the pitch," added Boothroyd.

"Particularly when a team is under pressure, you need to have a strong man, somebody who will lead by example and can boss one or two others about.

"He brings all those things to the team."

The Cobblers saw previous loan keeper Chris Weale leave the field with a knee injury in the 1-0 win over AFC Wimbledon, and he subsequently returned to parent club Leicester City.