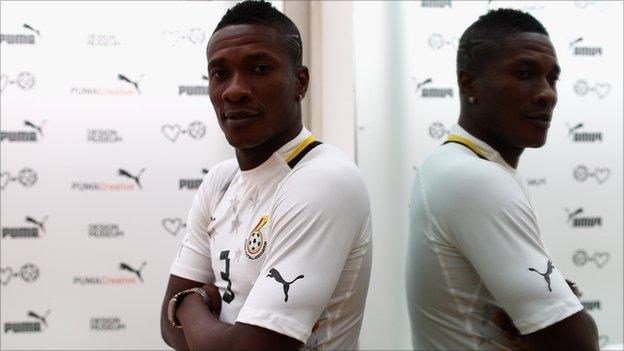 Gyan 'indefinitely' quit the Black Stars on Saturday, frustrated at the abuse suffered after his missed penalty in an Africa Cup of Nations semi-final.

However, Anagbla is confident that the striker will return for June's opening 2014 World Cup qualifiers against Lesotho and African champions Zambia.

"He'll be available - he'll be there to play for Ghana," said Anagbla.

"This morning, I was able to [talk to] him and don't forget I have this good relation with him.

"So I was able to talk to him to come out of his decision - to agree with me that he will be available for any game."

The Black Stars open their Group D campaign against Lesotho on the first weekend of June, before playing 2012 Nations Cup winners Zambia a week later.

Anagbla also spoke about the volley of abuse that Gyan has suffered since his early penalty in the Nations Cup semi-final defeat by Zambia was saved by Chipolopolo goalkeeper Kennedy Mweene.

It prompted the Al Ain striker to admit that he is 'psychologically down', in a statement on microblogging site Twitter.

Anagbla spoke of the death threats that the Gyan camp says it has received, as well as the mock obituaries about the player that have been posted online.

"No one is saying that you should not criticise - but when you criticise with death threats, that is more serious," added the FA vice-president.

"He is a public figure so is bound to be criticised but if you issue death threats, and put an obituary somewhere, this is very serious."

"You cannot joke with someone's life."

Should Gyan return to the Ghana fold in June, he will have missed no competitive matches - just the handful of friendlies that the Black Stars will play in the run-up to attempting to qualify for Brazil 2014.

At the last World Cup in South Africa, Ghana would have become the first African side to ever reach the semi-finals had Gyan not missed a penalty in the quarter-finals against Uruguay.

"As you can imagine it's been very hard for me mentally, to miss two important successive penalties for my country," Gyan explained in his statement on Monday.

"I never fully recovered from the 2010 World Cup."