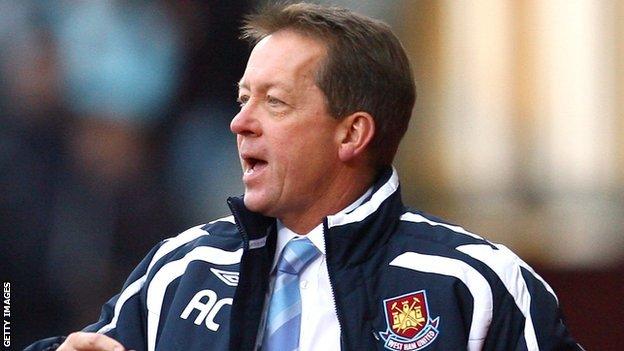 Curbishley was interviewed for the job last week but pulled out of the running because he and the board did not share a vision for the club.

Wolves made another approach to the ex-Charlton and West Ham boss three days later but he turned them down again.

Wolves also held talks with Reading's Brian McDermott, but he has since signed a new deal with the Royals.

Brighton boss Gus Poyet, another reported target, is also a possibility but the former Uruguay international and Chelsea midfielder would cost Wolves a "prohibitive" £2m in compensation.

Wolves owner Steve Morgan had wanted someone with Premier League experience to replace Mick McCarthy, who was sacked on 13 February.

Former Sunderland and Wigan manager Steve Bruce remains in the frame, while former Chelsea assistant and ex-QPR boss Ray Wilkins has said he would be interested if approached.

But relegation-threatened Wolves look no nearer to filling the vacancy before their next game at Newcastle on Saturday.

Caretaker manager Terry Connor looks set to take charge at the weekend and is demanding a positive response from the team following the 5-1 home defeat by West Bromwich Albion on 12 February.

Connor said: "We're asking the players to respond positively, like they always have done at bad times, and come back ready for another fight."