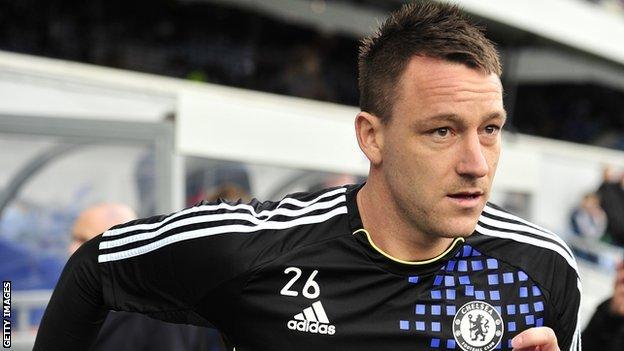 It was thought captain Terry, who has not played since the end of January, would be out for up to eight weeks after being told he requires surgery.

However, speaking on Thursday, Villas-Boas said: "He's going to be out for five to six weeks.

"There's a possibility he will come back sooner. He started rehabilitation [on Thursday]."

Terry, who will miss England's friendly with the Netherlands on 29 February, took part in training ahead of Chelsea's Champions League last-16 tie against Napoli before it emerged he could be sidelined until April.

"He'll have an exploratory arthroscopy after which the medical team will be better placed to advise on a prognosis," said Chelsea.

Terry, 31, was stripped of the England captaincy earlier this month, with Fabio Capello later resigning as coach.

His last game for Chelsea was the 1-0 win over Queens Park Rangers, since when he has missed games against Swansea, Manchester United, Everton and Birmingham - a run in which Chelsea have failed to keep a clean sheet.

He has been struggling with a knee problem since colliding with a post in the FA Cup match against Portsmouth on 8 January.