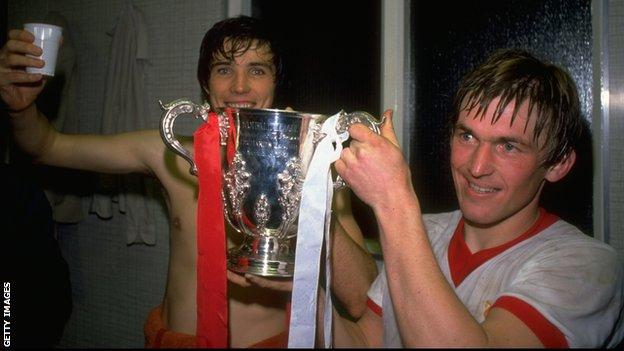 Liverpool boss Kenny Dalglish says victory in Sunday's Carling Cup final against Cardiff would mean a great deal to both himself and supporters after six years without a trophy.

The Reds have not won anything since their FA Cup win at Cardiff in 2006.

"It is just reward for the loyalty and support they have shown."

Championship side Cardiff stand between Dalglish and what would be his first ever League Cup win as a manager.

It is the one domestic honour missing from his managerial career, although he won it four times as a player.

A 3-2 aggregate win over Manchester City in the semi-final ensured Liverpool's first trip to the new Wembley, where they will bid for an eighth League Cup title.

"I think we've treated the competition with respect but the other teams that have are few and far between," added the veteran Scot.

"We have treated it very seriously. We've used 20-odd players to get there so every member of the squad bar a couple has made a contribution.

"We are grateful to all of them, to the owners and supporters and everyone who has stood by us."

The Reds go into the match on the back of a 6-1 win over Brighton in the FA Cup, which has set up a quarter-final clash with Stoke City at Anfield.

"We have moved on from where we were last year, progressing in the FA Cup and the final of this cup and are four points behind fourth in seventh place - this time last year we were nowhere near that," added Dalglish.

"There is progress being made. For the players it is an indication of how well they have done so everyone is looking forward to it.

"We have a chance so we will do as well as we possibly can and we will try to progress the club and move forward."