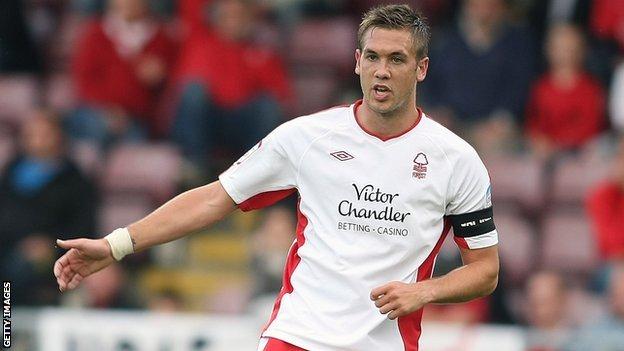 Nottingham Forest captain Luke Chambers says he understands fans' frustrations but has urged them to back the team.

Forest beat Coventry 2-0 last week but are only three points clear of the Championship relegation zone and the team were booed off at half-time.

Chambers said: "If the team are not doing well, confidence will take a knock but I'm really disappointed that the fans got on a few players' backs.

"All we ask is for them to stay with us because they will be massive for us."

Chambers acknowledged the Reds had done precious little on the pitch to encourage the fans, but said barracking them was the last thing a side with fragile confidence needed.

"They [the fans] are well within their rights to voice their opinions," he told BBC Radio Nottingham.

"But whether they think about the bigger picture is another question because when individual players are getting stick from the crowd, I am not sure that is going to bring the best out of them.

"There was a lot of negativity towards the team but we stuck to our task and got our rewards.

"It was pretty poor from both teams but that is to be expected when you are in a scrap.

"There was a a lot of nerves around the ground that probably found its way onto the pitch. We had to keep our heads.

Before beating Coventry, Forest had scored just one goal in their previous eight home matches

"We got booed off but regrouped and came out fighting in the second half and we were much the better side."

Chambers said Forest must make the most of the double boost of a first home victory since November and climbing out of the relegation zone because of Portsmouth's financial woes.

"We are fortunate to have Portsmouth right in the thick of it. We are out of the bottom three and that should give us a pyschological boost," he added.