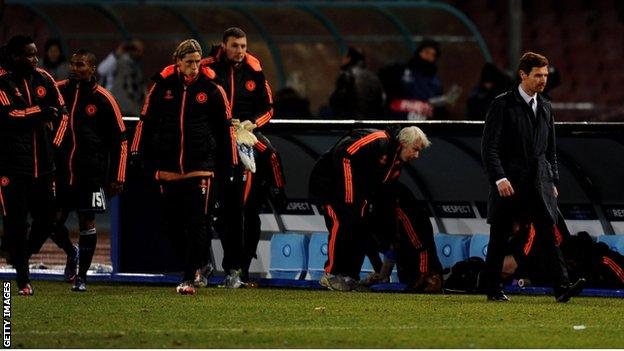 Chelsea boss Andre Villas-Boas says he stands by the team he selected for the 3-1 Champions League defeat by Napoli.

"You can have your opinion but it was based on what was the best team in my thoughts," he said.

"We will analyse strongly what we did wrongly because a couple of things need to get better. It is not impossible to recover from 3-1."

Cole was introduced as a 12th-minute substitute for the injured Jose Bosingwa, who started at left-back despite Cole having more than 200 starts for Chelsea and 93 England caps in the position.

Essien and Lampard came off the bench in the second half with their side two goals adrift.

"I had a conversation with Ashley and Frank. Through the players that they are and the players with the experience they have, they felt they could have helped the team," added Villas-Boas.

With Chelsea 17 points off the top of the Premier League and facing a tricky FA Cup fifth-round replay away to Birmingham on 6 March, the Champions League could be the only trophy which the west Londoners still have an interest in by the time of the second leg on 14 March.

Villas-Boas insisted that despite his side's failure to win any of their past five matches, he was confident he would still be in charge when that game is played.

"Napoli have edged this game deservedly, but I still don't rule out Chelsea going through at Stamford Bridge. I don't think it's over yet but defensively Chelsea have to get better."

The first leg was only Gary Cahill's third appearance for Chelsea since his January move from Bolton and, with captain John Terry sidelined for up to eight weeks with a knee injury, he made his Champions League debut alongside David Luiz in the centre of defence.

Villas-Boas said he wanted to build a better understanding among his defenders.

"We have to solve these mistakes at the back," said the former Porto boss. "We need this concentration right and this efficiency right, for sure.

"At the moment, without John, a very important player for the team, we have suffered a lot of goals recently.

"The first two goals we had more numbers back, and if we were more organised they wouldn't have scored."

An error from Luiz allowed Edinson Cavani to set up a potentially decisive third for Ezequiel Lavezzi, but the manager defended the 24-year-old Brazilian.

"He's a fantastic young player with a big future ahead of him," Villas-Boas said. "He has to work to try and be a bit better.

"We suffered three goals. If he's linked to one, he might not be linked to the other two."

With Arsenal trailing AC Milan 4-0 after the first leg of their last-16 tie, it is possible there will be no English team in the last eight of the Champions League for the first time since the 1995-96 season.