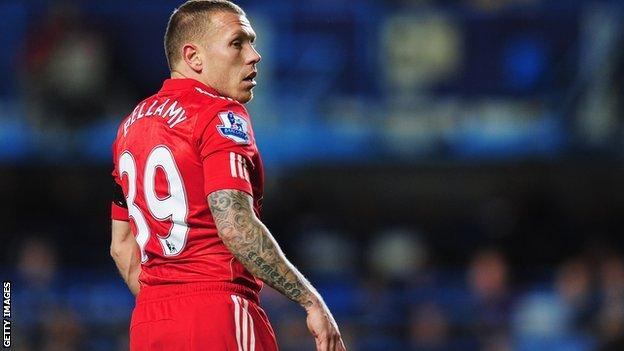 The former Cardiff captain may win his first major trophy in English football against his boyhood club but Bellamy will not celebrate if he scores.

Bellamy scored 11 goals in a loan spell at Cardiff last season as he fulfilled an ambition to play for the Bluebirds.

"My father is a Cardiff fan as are my family," said the Wales international.

"It is the club I used to go to when I was very young.

"I set one ambition in my life and that was to play for them and I was able to do that - but it is funny how football works out."

Bellamy was awarded the Cardiff captaincy when he signed on a season-long loan from Manchester City in August 2010 and played 35 games for the Championship side.

He was their star player but missed out on a visit to Wembley with Cardiff last season as the Welsh club failed to qualify for the Championship play-off final as they lost in a two-legged semi-final to Reading.

Bellamy was then signed by Liverpool from Manchester City in August 2011 so his first trip to Wembley will be against Cardiff but the 32-year-old insists it is not his dream final.

"It is a strange situation," he said.

"I've never played against them and it is not something I've really looked forward to doing to be honest.

"Football can sometimes be very unpredictable and I didn't really look at this and plan on playing a cup final against Cardiff or with them.

"I certainly wouldn't celebrate [if I score] - but I tried not to against but with the occasion and the moment you can get carried away.

"I certainly have no aspirations of doing that but I've got to be on the pitch first."

Bellamy has recovered from the back problem that threatened his Carling Cup involvement after undergoing treatment.

He missed Sunday's but is confident he will be fit for Sunday's final.

"My fitness is fine," said Bellamy.

"My back spasmed up after I came on against Manchester United a week and a bit ago, and it just got a little bit worse during the week instead of improving.

"The manager said 'look, if you need an injection then get it done now because we have a lot of games coming up. It's such a busy period, so get it sorted just in case'. I start training on Thursday, so I'm fine at the moment."