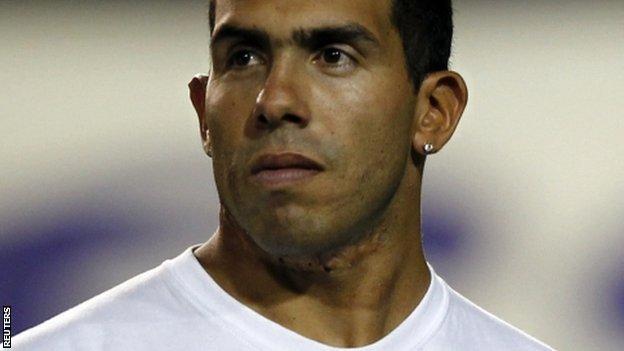 Argentine striker Carlos Tevez has apologised "sincerely and unreservedly" for his actions in the row between the player and his club, Manchester City.

Tevez hasn't played for the Blues since a touch-line bust-up with City manager Roberto Mancini in September. Now he hopes to be reconsidered for selection.

The disagreement has been lengthy and complicated. Here is what has happened:

27 September: Manchester City manager Roberto Mancini says Carlos Tevez is "finished" at the club after accusing him of refusing to play as a substitute in the Champions League game against Bayern Munich.

28 September: Tevez issues a statement insisting he only refused to warm up and blames a misunderstanding, but City suspend the Argentine for two weeks pending an investigation.

13 October: Tevez reports back to City after a suspension but is ordered to train alone and is kept out of the first-team squad.

25 October:City announce they have found Tevez guilty of five breaches of contract, including refusing to play, and fine him four weeks' wages.

27 October: City halve Tevez's fine to two weeks' wages following a ruling by the Professional Footballers' Association, who also back the player's stance that he only refused to warm up.

1 November:Mancini says Tevez could come back into his side, if he apologises for the events in Munich.

8 November: Tevez's 14-day deadline to appeal against City's ruling that he was guilty of misconduct passes without him doing so.

9 November:City confirm that Tevez fails to report for training and is understood to have returned to Argentina without permission.

24 January:It transpires that City stopped paying Tevez's wages, estimated at £200,000 a week, at the end of November and also fined the South American six weeks' wages on December 22 for gross misconduct over his refusal to return. Tevez subsequently appealed against the punishment but that was dismissed on 7 January after a hearing involving two City directors, Marty Edelman and Mohamed al-Mazrouei.

30 January: Tevez's advisors lodge an appeal with the Premier League against the six-week fine imposed by City.

31 January: AC Milan, Inter Milan and Paris St Germain all show an interest in Tevez during the transfer window but no move is forthcoming before the deadline.

3 February:Mancini admits Tevez could feature in the Premier League again if he proves his fitness, and names the Argentinian in his 25-man squad for the remainder of the season.

21 February:The player apologises "sincerely and unreservedly" for his conduct in recent months in a statement released by the club, withdrawing his appeal against a fine for gross misconduct.