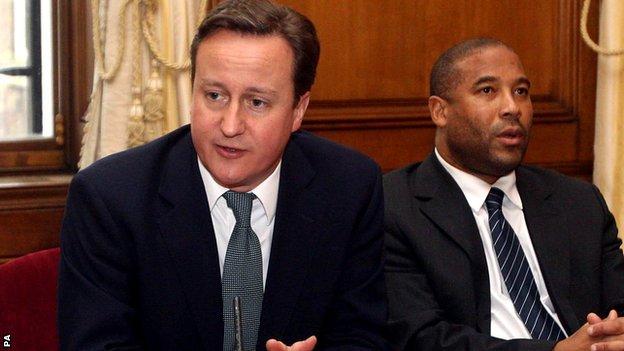 The Prime Minister has pledged to "crush" racism in football at the launch of an anti-discrimination summit at Downing Street.

We need to act quickly to make sure [racism] does not creep back in. If everyone [in football] plays their role, then we can easily crush and deal with this problem

However, he acknowledged that elements of discrimination had "crept back in".

Cameron also said he expected sport to be able to "deal with this problem".

Racism in football has been in the headlines on several occasions this season.

Liverpool striker Luis Suarez refused to shake the hand of Manchester United defender Patrice Evra earlier this month. Suarez himself had only just returned from an eight-match ban after the Football Association found him guilty of racially abusing the French left-back.

In a separate incident, Chelsea captain John Terry is due to face trial over the summer on charges of racially abusing QPR's Anton Ferdinand. Terry denies the charges.

In a meeting at Number 10, the Prime Minister told the assembled panel of ex-footballers and football bosses: "We want to make sure football is all about a power to do good, rather than anything else.

"What happens on the field influences what happens off the field. You see children as young as six imitating the behaviour they see."

While acknowledging that British football has done a great deal in seeking to clamp down on discrimination in the sport, Mr Cameron said to the group: "We have some problems still today.

"We need to act quickly to make sure those problems do not creep back in.

"If everyone [in football] plays their role, then we can easily crush and deal with this problem."

The plan is for St George's Park to help develop the next generation of England players and coaches, and there will be specific initiatives to increase the number of black and minority ethnic participants in the sport.

Hunt told the meeting: "We've made significant progress over the last two decades in tackling discrimination in football and this is something we should be proud of. But we mustn't become complacent.

"It would be great to see more black and ethnic minority coaches and managers working in the game and this is something we want to work on achieving with the football authorities."

Former England and Liverpool star Barnes told BBC Radio Five live: "The effect [campaigns] have had is that you don't hear [racism] at football stadiums any more.

"In terms of changing people's minds in terms of how they feel about another group of people… if you're a racist, you're not going to change your mind because a club says it's wrong to be racist.

"Ultimately, until we get rid of it in society, it will exist in all walks of society."