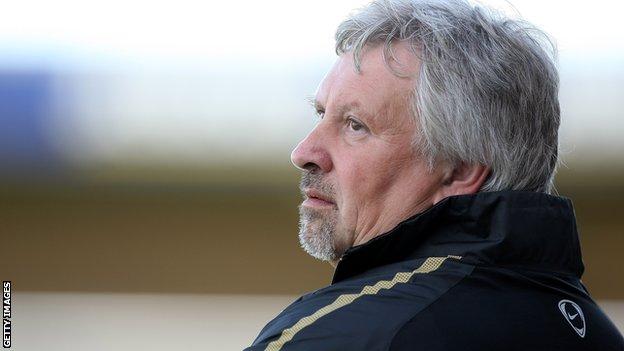 Southend United boss Paul Sturrock says he has no option but to 'change the personnel' at the club in light of Tuesday's 2-0 loss at Aldershot.

The Shrimpers, who have led League Two for large parts of the season, are now third after four defeats in their last seven games.

"There's too many of them so inconsistent it's unbelievable," Sturrock told BBC Essex.

That performance was shocking really. All I can say is I'm deeply sorry for the fans that travelled

"At the end of the day we can't tolerate it any longer."

Sturrock had already demanded a response from his side following defeat by Rotherham on 10 February, and they went on to record back-to-back wins over Gillingham and Crewe.

But the Scot saw his charges put in a laboured performance against the Shots, failing to register an effort on target throughout the 90 minutes.

"If we've got ambitions of winning the league, first and foremost we've got to churn out performances and results," he said.

"We're back to the Rotherham debacle. This team needs a freshness as far as personnel is concerned. Too many of the players have let themselves down again.

"There's several people there that have had several chances to show me they are the right people for the job, and again they've come up short.

"There's two or three players out there who you would put in the outstanding category one week and then ordinary the next.

"At one point there was 18 players I could pick from. As the season's unfolded there's a few letting themselves down."

Midfielder Michael Timlin said the Shrimpers approached the game with the wrong attitude and issued an apology to supporters.

"I want to say sorry to the gaffer, the chairman and most importantly the fans," he said.

"That performance was shocking really. All I can say is I'm deeply sorry to the fans that travelled."