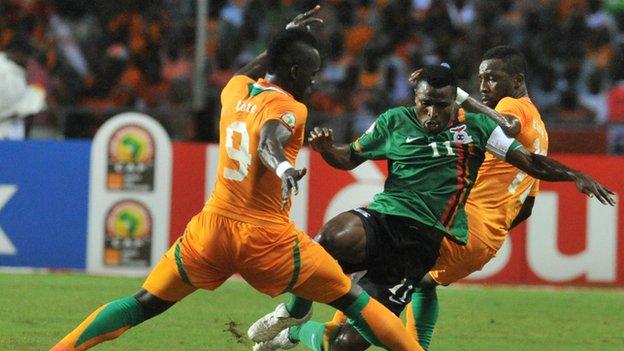 Ivory Coast star Cheik Tiote has revealed that he has given away his Africa Cup of Nations runners-up medal.

The midfielder was part of the Elephants squad which was beaten in a dramatic penalty shoot-out by Zambia, after the final ended goalless.

"I gave my medal to a friend, because I was so disappointed," the Newcastle United star told the club's website.

"I didn't want to keep it - we did well, but we didn't win it; maybe next year we will win the competition.

Tiote has yet to return for Newcastle, having missed seven games during the Nations Cup, but is set to feature in the squad for their English Premier League clash with Wolves this weekend.

Ivory Coast received a warm welcome on their return to Abidjan, despite their disappointment, but he is now turning his attention back to club priorities.

"It has been great to see my friends and to be back in Newcastle," Tiote said.

"I have to think about Newcastle because the tournament with my national team is finished now.

"It's important when you come back from your national team for the fans and manager to see what we have ambition for the club to do well."

His Newcastle teammates Demba Ba and Papisse Demba Cisse were available much earlier on because of Senegal's failure to progress beyond the group stage in Equatorial Guinea and Gabon.

Newcastle's most recent outing in the Premier League was a 5-0 drubbing at the hands of Tottenham Hotspur.