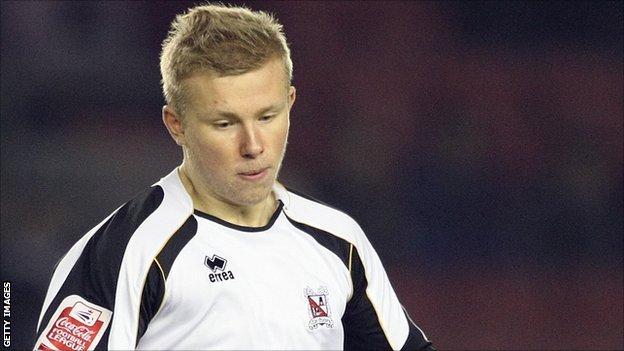 Middlesbrough manager Tony Mowbray has praised striker Curtis Main after he scored his first goal for the club in Tuesday's 3-1 win at Millwall.

The 19-year-old came off the bench to net late on in only his fourth appearance since his switch to the Riverside in June 2011.

"If we get the ball in the box for him he will score," Mowbray told BBC Tees.

"The coaching staff have been waiting for an opportunity to drop to him because he has such pure feet."

He added: "It wouldn't have mattered what side it fell onto, his left or his right, as he has that ferocity in either foot, he can smash it as he did tonight.

"We're delighted for him, but he's far from the finished product, he's got a lot to work on in terms of his positional play and his game knowledge."

Meanwhile Mowbray was also grateful to midfielder Barry Robson, who played on with thigh and hand injuries before finally making way on 86 minutes for Tony McMahon.

The 33-year-old Robson has scored eight goals in 29 appearances for the Teessiders this season, but is to leave the club at the end of the season.

"We needed Barry on the pitch in my opinion, and I had everyone in my ear telling me he was struggling, but I'm not blind, I can see it for myself," Mowbray said.

"Sometimes in a game like that you need your warriors, and Barry stayed on until the game was won, he understands.

"People could question his committment because he signed a pre-contract agreement with Vancouver in the MLS, but there it was today, Barry Robson playing with one leg and one arm, giving all he's got.

"If he's not ready at the weekend he'll be a huge miss, if the injury is a sore one.

"You could see in the first-half his pressing, his ability to win the ball and quality, was huge for us."