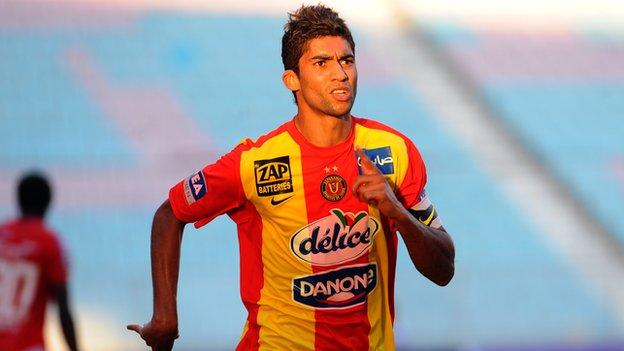 The Tunisian international, who played a key role in his club's African Champions League success, will join on a four-year contract, Sion say.

Darragi helped Tunisia win the CHAN, the African tournament for locally-based players, and reach the quarter-finals of the Africa Cup of Nations.

Darragi's contract with Esperance ends in June and the club will get nothing from the deal.

Officials and fans have reacted with anger to the move, the BBC's Mourad Teyeb reports from Tunis.

When he does join them, Darragi is likely to be playing in the Swiss second division.

Sion are facing relegation from the Swiss top flight, after being hit with a 36-point deduction for breaking a transfer embargo.

It is the latest step in a saga which began in 2008, when football's world governing body Fifa ruled that the club had been guilty of inducing Egypt goalkeeper Essam El-Hadary to break his contract with Cairo-based club Al Ahly.

Darragi's performances for both club and country have attracted attention from some of Europe's top sides - with Sion claiming they have beaten Inter Milan, Marseille and Werder Bremen to his signature.