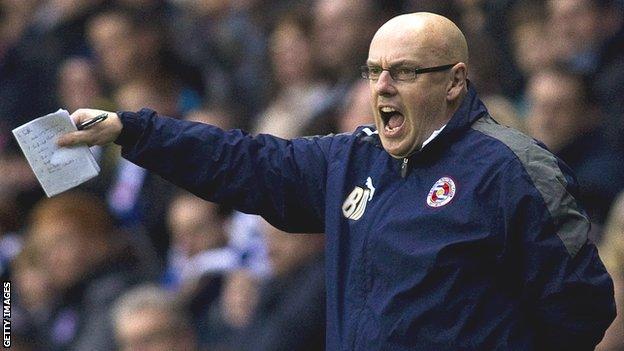 Reading manager Brian McDermott has signed a new contract with the Championship club, ruling him out of the running to take over at Wolves.

The 50-year-old's deal keeps him at the Madejski Stadium until 2015.

Wolves asked for permission to speak to McDermott this week as they seek to replace Mick McCarthy at Molineux.

"There was a lot of talk, but I didn't say anything, I'm happy it has been done and we can get on with football," McDermott told BBC Berkshire.

A former chief scout for the Royals, McDermott was named as full-time manager in January 2010 following a short period as caretaker when Brendan Rogers left.

Since then he has led Reading to last season's Championship play-off final which they lost 4-2 to Swansea, after finishing the season in fifth.

McDermott's men are in contention for the play-offs again this term. They lie in fourth and are just five points off the automatic promotion places.

Questions had been raised about whether the former Slough and Woking manager would seek a new challenge in light of new owners taking over from long-time chairman Sir John Madejski.

But McDermott revealed he met with new owner Anton Zingarevich over the weekend and that conversation helped convince him to stay.

"This is my club, the fans are really important to me and I have great staff, players and we work so well together," McDermott added on BBC Radio Berkshire.

"But the big thing for me was my relationship with the new owner Anton. I had a conversation with him on Sunday and another one on Monday. He said something very important to me and after that there was only one place I was going to be at.

"The manager's relationship with the owner if very important and we are building that rapport with each other."

McDermott added that the messages of support from Reading fans as the news of his potential departure emerged also helped in his decision to remain at the Royals.

"I know what the fans think of me, but I was still very touched by the support they gave me and it means a lot," he said.

"We've been talking for three weeks now and it's good to get it done. Now myself and everyone else can concentrate on the football.

McDermott added: "You would be swayed by the Premier League whichever club you were at and Wolves is a great club.

"As a manager and a player you have ambitions to be in the Premier League but all things being equal there was only one place for me."