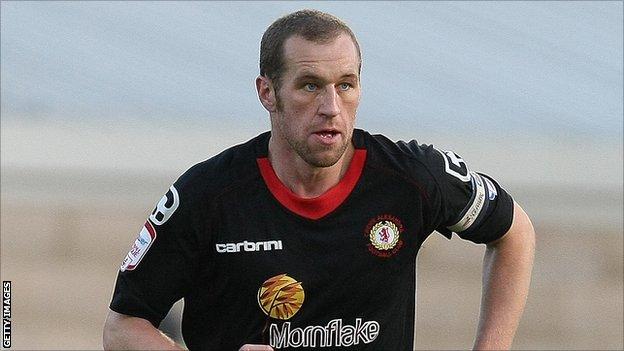 Crewe Alexandra captain David Artell has called for "clear and definitive" tackling rules to be introduced.

Several managers have voiced concerns about the stance currently being taken by officials on strong challenges.

"I think there has to be a clear and definitive rule because, as players, we don't really know where the law is," Artell told BBC Radio Stoke.

The 31-year-old was unhappy with the performance of referee Robert Madley during the 2-0 win against Accrington.

Madley chose not to punish Stanley midfielder Luke Joyce for a lunging first-half challenge on Ashley Westwood on Tuesday, and then booked the Crewe youngster seconds later for complaining about the decision.

Stoke City manager Tony Pulis has been particularly upset by the inconsistency of Premier League referees in recent weeks.

Two weeks previously, Robert Huth was sent off against Sunderland when appearing to pull out of a challenge on David Meyler, although .

Artell believes the issue has been complicated further by a DVD that has been distributed to all Premier League and Football League clubs, containing various examples of tackles and the punishments that should be handed out for each offence.

"I think it was instigated by [Stoke manager] Tony Pulis after the Robert Huth incident and then the Rory Delap incident, which has now been overturned," he said.

"A few of us have watched the DVD and we had differences of opinion.

"Even the Milijas one, when he got sent off for Wolves [at Arsenal in December].

"They appealed it and it got turned down. It's on the DVD that the FA sent out and they say it should have been a yellow card. Work that one out."