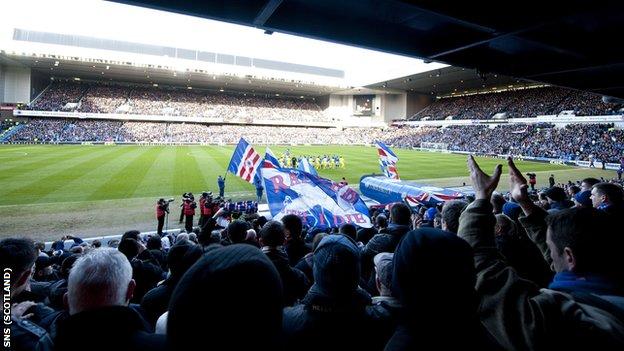 The Scottish Premier League is investigating sectarian chanting by Rangers fans during Saturday's 1-0 defeat by Kilmarnock at Ibrox.

Singing was mentioned in the SPL delegate's report and Strathclyde Police will be consulted before a course of action is decided.

The police also reported that one sectarian-related arrest was made during the match.

It was Rangers' first match since entering administration last Tuesday.

ln February last year, European football's governing body Uefa imposed a one-match ban on Rangers' travelling supporters and a fine of 40,000 euros for discriminatory behaviour at the match against PSV Eindhoven on 10 March 2011.

Uefa also issued the club with a suspended ban on its fans for a second away game, a ban on home fans for one match and a further 40,000 euros fine if sectarian chanting by a section of the support persists in the next three years.

At the time, supporters' groups vowed to tackle the problem proactively and insisted they would improve the image of the club's fans.