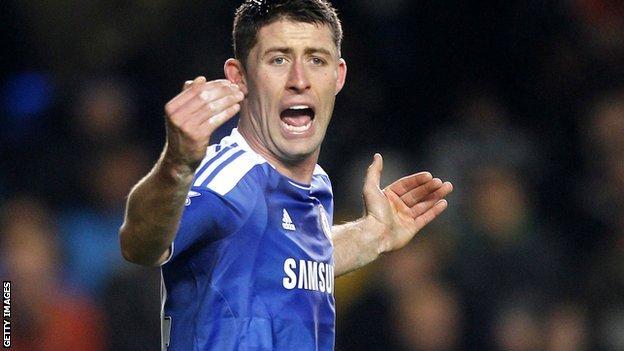 New Chelsea signing Gary Cahill has said the players "need to pull their fingers out" after their 3-1 Champions League loss to Napoli.

Cahill made only his third start as Chelsea squandered a 1-0 lead to severely dent hopes of progressing.

And the centre-back said Tuesday's loss was down to "simple, basic" errors.

"The goals came from long balls. If we were getting caught open it might be different, but it was bread-and-butter things that went wrong," he said.

The defeat at the Stadio San Paolo has left Chelsea as outsiders to qualify for the last eight from the return leg at Stamford Bridge on 14 March and Cahill, who joined from Bolton for around £7m in January, said that to have any chance they would have to up their performance level.

"We are still in it. To score two goals at Stamford Bridge is by no means beyond the realms of possibility," he said.

"The third goal killed us a little bit, but we need to pull our finger out in the next leg and put in a better performance."

Chelsea took the lead in Italy through a Juan Mata strike before conceding three goals in 38 minutes either side of half-time.

And Cahill admitted that the defenders must shoulder much of the blame.

"We should have shut the door, made everything really compact and gone in at half-time 1-0 up," he conceded. "We were too easily cut open.

"They had good players all around the pitch, but I think we made their job a little bit easier."

Fellow Chelsea defender Branislav Ivanovic admitted that morale at Stamford Bridge had been hit during a recent run of form that has them win just once in their last seven matches, slipping to fifth in the Premier League in the process.

"This is the hardest moment of my four years here," Ivanovic revealed. "We haven't won a lot of games and our confidence is not in the best way."

However the Serbia international defended under-fire boss Andre Villas-Boas, adding: "The manager is doing his job by deciding who plays and we, as players, have to do our job."