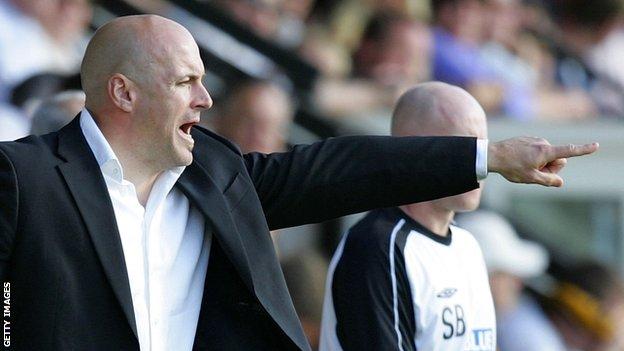 was the Hatters' first in 14 league games.

"We know we have made it even harder now with the disappointing performance and result," Brabin told BBC Three Counties Radio.

"We're always playing catch up, but we certainly won't be giving up."

Luton, who were beaten by AFC Wimbledon in last season's play-off final, had been in superb form until their trip to the Bluebirds, taking 23 points from the 27 available in their last nine outings.

But Brabin was frustrated by his side's display in the north-west, where they were undone by a 73rd-minute Alex-Ray Harvey effort.

"We've got to get stronger and certainly learn from this, because that wasn't good enough," he said.

"We've certainly got to be better than that if we've got aspirations of getting promoted.

"I told the players what I thought and of my anger. It's easy to hide behind excuses. I don't want us to do that.

"I'm very, very disappointed. To concede the goal and lose the game - I can't put into words how I feel at the moment.

"I'm still feeling very angry. I feel sorry for the supporters who had to travel down and witness that."