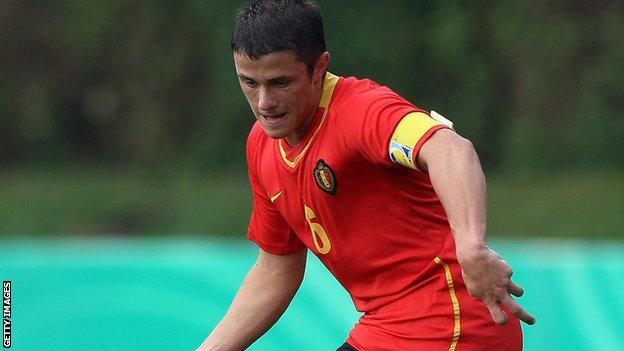 Walsall's on-loan midfielder Florent Cuvelier says he is delighted that parent club Stoke City have allowed him to stay till the end of the season.

The 19-year old Belgian has blossomed at the Saddlers, scoring twice in his first four appearances for the club.

"For me it can only be a good experience, playing games week-in, week-out," Cuvelier told BBC WM.

The Brussels-born teenager netted the game's only goal as Walsall defeated fellow relegation-battlers Scunthorpe at Glanford Park on Tuesday night.

He had previously found the net in the 2-1 defeat at Oldham earlier this month, and won a penalty during the 2-0 home win over Wycombe.

And although this is his first taste of senior football, he is braced for the battle against the drop.

"Yeah, it's a challenge, but I'm not here to keep Walsall up on my own, it's the full squad that's fighting hard every week to do that.

I want to do well all the time, then just see what happens next season

"If it's possible I want to score every game that I play with Walsall, but I'm not sure if that'll happen! I'll do my best to score as many goals as I can, work hard and get experience."

Prior to joining the Saddlers on loan, Cuvelier had failed to make the first-team at Stoke or his previous club Portsmouth - and now he is ready to kick-start his career.

"Football is my passion. I started to play when I was four or five and I love to play.

"I want to do well all the time, then just see what happens next season."

Cuvelier's form has helped Dean Smith's side record back-to-back victories for the first time this season, climbing out of the League One relegation zone in the process.

Now they face away games at Preston and Leyton Orient as they try to climb to safety.