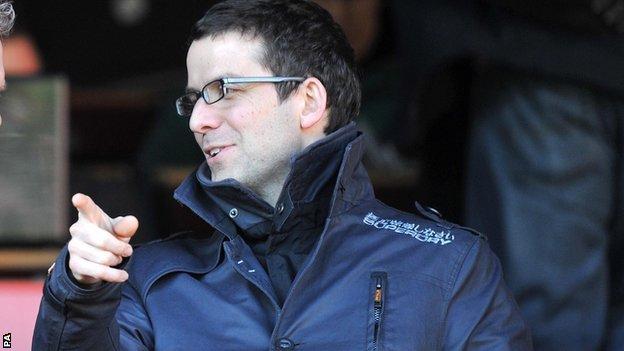 Chief executive David Lampitt and two board members are among a raft of redundancies at Portsmouth.

The trio are among 30 to lose their jobs at the beleaguered Championship club, six days after it was placed into administration.

None of the playing staff are being made redundant, but it is understood they are being asked to defer wages.

As things stand, there is a serious risk the club could run out of cash within the next couple of months.

Birch said redundancies were being made across all levels and departments within the club. Directors John Redgate and Nick Byrom are among those leaving the club.

"Additionally, we are asking certain employees to defer wages on an ongoing basis and are asking several members of staff to move from a full-time to a part-time role," Birch said.

"These measures are painful for everyone involved with the club, but they are essential for Portsmouth's survival, which is our main objective."

Portsmouth were deducted 10 points last week for going into administration for a second time in three years.

Birch continued: "To put it bluntly, Portsmouth Football Club has a Premier League cost base but only Championship income. This is not a sustainable situation and one that needs to be addressed urgently if the club is to continue to exist.

"As things stand, there is a serious risk the club could run out of cash within the next couple of months.

"I recognise that this is not the news that anyone wants to hear but burying our heads in the sand will not help anyone. Today's redundancies will make a difference to the club's financial position but there are sure to be further challenges ahead of us.

"Portsmouth's survival depends on us being able to find a buyer for the club before the money runs out."