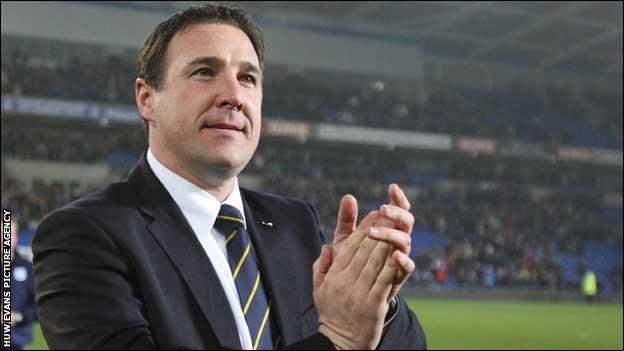 Malky Mackay has been rewarded for guiding Cardiff City to the Carling Cup final against Liverpool with a new three-and-a-half year contract.

The 40-year-old was named as Dave Jones' successor in June 2011 when the Bluebirds paid Watford around £300,000 in compensation to appoint him.

He initially signed a one-year rolling deal at the Championship club but his new contract now runs until June 2016.

"It's with great pride that I have signed a long term contract," he said.

"My positive thoughts of Cardiff, as a city, a club and its supporters have only been enhanced further since coming to South Wales last summer.

"Along with my coaching team, my squad of players and the many hard working people at the club I look forward to the future as we aim to bring success to this club."

The Scotsman has led the Welsh side into the Championship play-off places and chasing automatic promotion to the Premier League despite having to rebuild the squad on his arrival.

Cardiff lost 12 players following their Championship play-off semi-final defeat to Reading last season and Mackay was forced to make 10 new signings in the summer before adding a further three in the January transfer window.

Mackay, the former Scotland international defender, has exceeded expectations since his arrival at the Cardiff City Stadium as the Bluebirds are fifth in the Championship table, six points behind second-placed Southampton.

"We are honoured to see Malky commit himself to our great club for the long term," Cardiff chairman Dato Chan Tien Ghee said.

"His dedication and hard work has been a joy to see over the last eight months, as has the positive influence it has instilled with everyone associated with Cardiff City.

"The length of contract outlines the strength of bond we all feel and we can look forward with optimism to the years ahead under his stewardship."

Mackay will lead his Cardiff side out at Wembley on Sunday as the underdogs face Premier League giants Liverpool in their first Carling Cup final as the Welsh club bid to lift their first major trophy since winning the 1927 FA Cup.