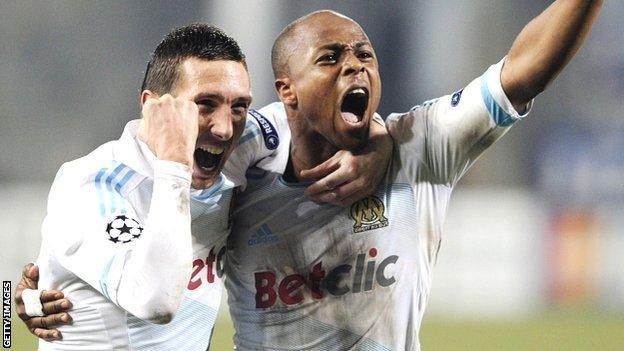 Andre Ayew rose highest to head home a corner in injury time to give Marseille a slender advantage in their Champions League last-16 tie with Inter Milan.

With the game seemingly destined for a goalless draw, Ayew beat the Inter defence to glance home at the death.

Prior to that, the French side had toiled hard but looked short of quality in what was a drab encounter.

Inter did little to contribute any excitement of their own and will be left ruing their lack of adventure.

It means Claudio Ranieri's side have now gone seven games without a win in all competitions. They have lost the last four without scoring a goal, the first time the Nerazzurri have suffered such a run since February 1999.

For Marseille, though, this is their first win in a Champions League knock-out match since they beat AC Milan in the final in 1993.

It would be charitable to say they deserved the victory after a display that showcased intent more than it did incisiveness, but it was at least a testimony to their determination to continue fighting until the end.

Last season, Didier Deschamps' side were unadventurous in drawing their home leg against Manchester United 0-0 and it cost them their place in the competition. This time they crafted openings, but lacked the guile to capitalise.

It was only as the game wore on that they began to look threatening as Ayew twice rose to head wide from Morgan Amalfitano crosses.

Inter's failure to heed the warning duly cost them as the Ghanaian headed in Mathieu Valbuena's corner three minutes into injury time to settle the leg.

You would forgive Ranieri for feeling that he is destined ever to dwell in the shadow of Jose Mourinho. Eight years ago he was sacked to make way for the self-styled 'Special One' at Chelsea and now he is struggling under the weight of Mourinho's treble-winning achievement at Inter two years ago.

However, there is little doubting that Ranieri is producing a poorer product than his predecessor from essentially the same ingredients. With the Portuguese at the helm, Inter were confident and ruthlessly efficient, and you suspect they would have put an honest but limited side like this Marseille one to the sword.

But under Ranieri, the Italians lacked the assurance and assertiveness to completely neutralise the French team's threat or decisively pick them apart.

Diego Forlan had their best chance in the first half, but his first-time shot from Esteban Cambiasso's cross was tipped over by Steve Mandanda. Their only other clear opening saw Dejan Stankovic shoot straight at Mandanda from close-range following a free-kick.

Inter will consider this a deficit they can overturn in the second leg at the San Siro - but they will have to play much better than this.