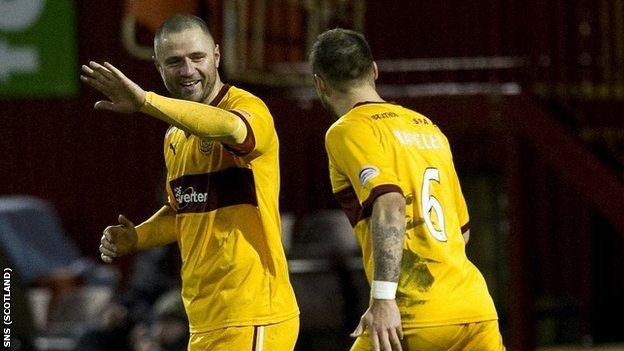 McCall highlighted how fans were singing Higdon's name during the 4-3 win, a strark contrast to earlier in the seaon when he had attracted boos.

"Over the last month, his performances have been excellent," said McCall.

"His goals had slightly dried up, but his actual leading the line has been terrific and he did that again."

Higdon's second goal, an overhead kick, put Motherwell ahead at 3-2 and his second penalty of the match proved to be the winner.

Jamie Murphy was also on target for the Steelmen, who are now three points behind second-placed Rangers in the Scottish Premier League.

"He came up with three goals," added McCall. "What a great connection [for the third goal]. Technically very good.

"Full credit to Hibs, they were excellent throughout the game.

"We gave a couple of sloppy goals away, but to get four goals in a half and play some of the stuff we did, I'm delighted.

"Two of the goals were outstanding and two were penalties, but the football to win the penalties was good play."