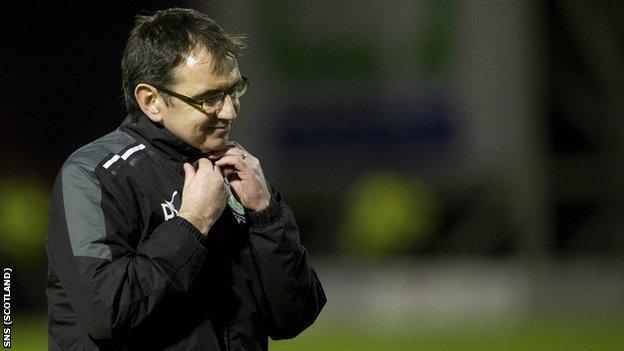 "I said when I came here I'll do whatever I can to make sure we stay in the league and we'll keep doing that.

"I can't ask for any more effort from the players. We've just got to cut out silly mistakes."

Those mistakes included the loss of two penalties, both scored by Michael Higdon, who claimed another to add to Jamie Murphy's strike.

Isaiah Osbourne had given Hibs the lead early on and Matt Doherty levelled for the visitors at 2-2.

But Ivan Sproule's late goal proved only to be consolation for the Leith side, who remain level on points with bottom club Dunfermline, who have an inferior goal difference having played a game more.

"We're desperately disappointed," added Fenlon. "We played well, we've scored three goals away at Motherwell, who are very good side and still we haven't got anything out of the game, so it's very cruel on the players.

"There haven't been too many teams that have come here and given Motherwell that hard a game I would think this season.

"But we defend again similar to Sunday against Celtic. Defensively, as a team, we've been giving away very, very soft goals.

"There are a lot of plusses. The players worked really hard, I can't fault them for effort.

"We're not making teams work hard enough to score against us and we're having to work really hard to get our own goals.

"The effort is there, the willingness is there, but we've just got to defend better.

"I suppose it makes it interesting for the league. There's very little at the top to make it interesting, so the bottom of it has a bit more interest in it.

"But it's no good to us. It's difficult to take at the moment."