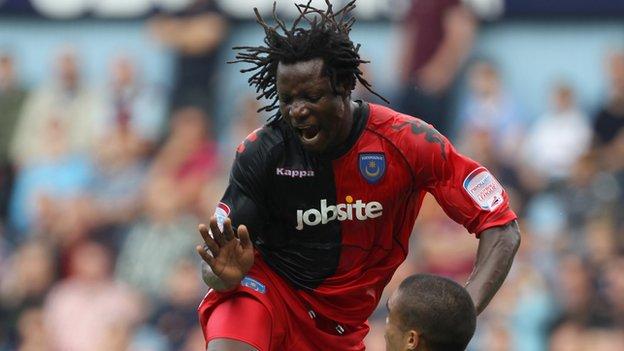 Former Zimbabwe captain Benjani Mwaruwari has unveiled plans for a testimonial match between the national team and an African all-star side.

Benjani told BBC Sport that the game will be played on 26 May in Harare.

He expects players like Nwankwo Kanu, Yakubu Ayegbeni and Michael Essien to take part in the game.

"I can't promise that all of them can come, but so far I've contacted 25 players and there are 40 altogether that I want to invite," he said.

Emmanuel Adebayor, El Hadji Diouf, Christopher Samba, Aaron Mokoena and Steven Pienaar are all likely to be asked to take part as well.

Benjani spent three days in Harare to book the National Sports Stadium and make other arrangements for the match.

He then returned to English second-tier side Portsmouth, where he is having a second spell with the club.

The club is battling to stay in business after going into administration for a second time.

After playing for Auxerre in France, Benjani spent five seasons in the English Premier League with Portsmouth, Manchester City, Sunderland and Blackburn Rovers, where he rubbed shoulders with many top African players.

"I'm doing this especially for the fans, we've not had many Zimbabwean players going to England, where the big stars are, so this is an opportunity for the fans to see the stars playing in Zimbabwe," he said.

"I'm planning to give the some of the funds raised from the game to charity and the rest to build a football academy."

Benjani, 33, retired from international football in 2010, and the testimonial will rule out any chance of a Warriors comeback, but he says that he hopes to keep playing in Europe for a few more seasons.

"I can't say at the moment, I'll take it as it comes, but you know at my stage of my career, that's where you really start to enjoy, when you are about to finish," he said.

"I'm looking forward to keeping on having one-year deals every season."