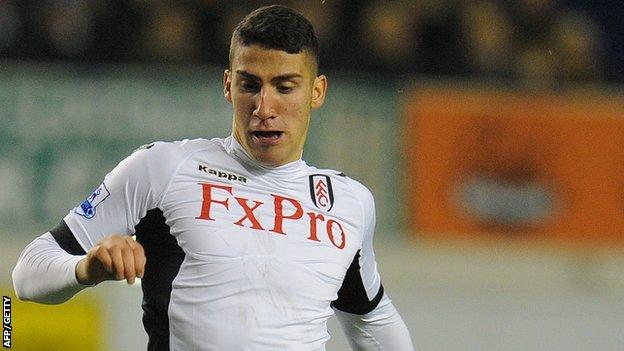 Watford have signed Fulham striker Marcello Trotta on a one-month loan, keeping him at Vicarage Road until after the visit of Ipswich on 24 March.

The 19-year-old Italian netted eight times in as many games during a spell with League One strugglers Wycombe earlier in the season.

"I think now is the right time to come to a Championship club and play," he told BBC Three Counties Radio.

"When you score, even at League One level, people start to know your name."

He added: "I want to test myself at a good level and maybe go back and play some first-team games."

Trotta's exploits in front of goal at Wycombe led Chairboys boss Gary Waddock to label the forward a "goal-scoring machine".

He subsequently made his Fulham debut in January's FA Cup defeat by Everton.

Trotta, who joined the Cottagers from Napoli in 2009, has scored 25 goals in each of his side's last two youth-team campaigns and is an Italy Under-19 international.

He is the second Premier League player to join Watford this week following the arrival of Manchester United's Polish international goalkeeper Tomasz Kuszczak, 29, on loan for the rest of the season.